Eons ago in 2013 I wrote a post about weird things I found in the "goth" search on Etsy, and while searching for craft supplies I discovered that, in fact, my post did not cause a revolution and make all shop owners simultaneously stop erroneously calling things Goth just to get page views. Shame, that. So, what did I find this time? 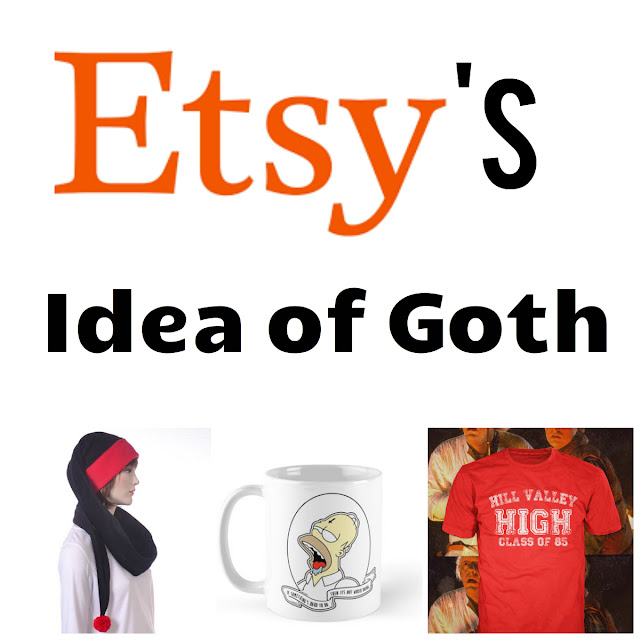 Ah yes, Back to the Future. Now, I've never seen this movie so maybe I'm missing out and it really is a Goth classic, but somehow I doubt it. Shirt here. 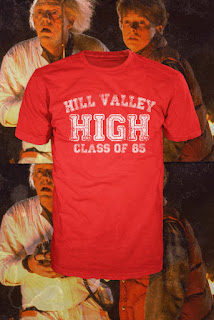 Batman letter blocks. Come on, y'all. Everyone knows Batman is an emo superhero, not a Goth one. 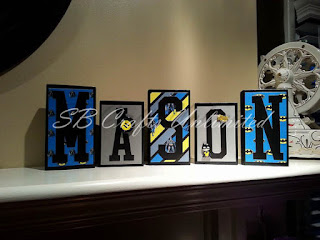 This shirt is labeled as Pastel Goth and, admittedly, I don't understand Pastel Goth at all but somehow it still offends me. 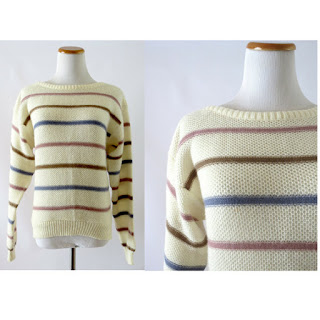 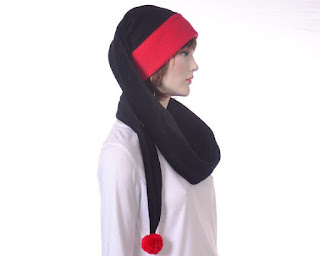 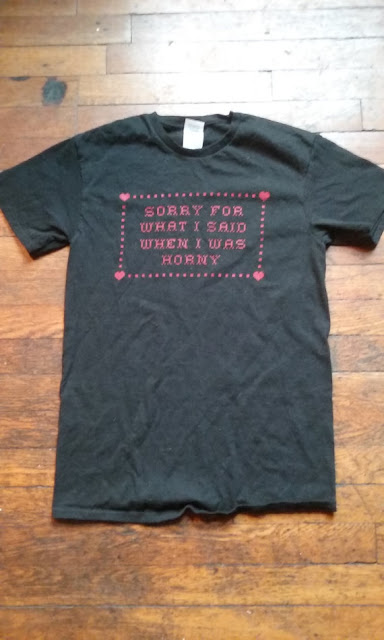 If you can't read the mug, it says "If something's hard to do, then it's not worth doing." Ugh. Admittedly I hate The Simpsons but I'm laughing at how adding the little upside down cross is supposed to make it Goth in any way. Why are we like this. 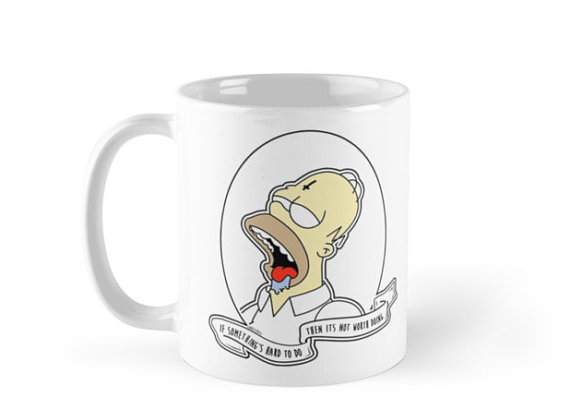 All I can imagine is someone's poor grandma who doesn't understand Goth doing a keysearch for Goth and buying them this Ring Pop ring. "This is Goth, right dear?" No, grandma. 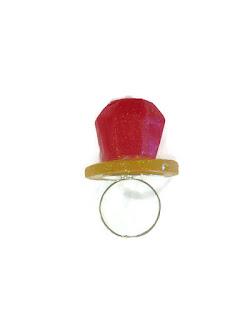 When life gives you lemons, stop making them into hair accessories and tagging them as Goth on Etsy, please. 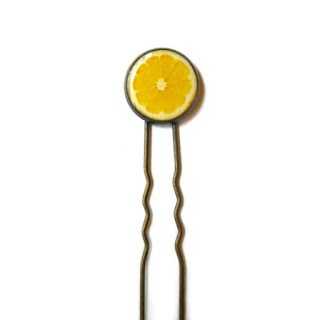 What's the weirdest thing you've ever found in the Goth tag on any website?
19 comments:
Email ThisBlogThis!Share to TwitterShare to FacebookShare to Pinterest
Labels: shopping

Some Thoughts on Not Prioritizing Goth

A lot has changed in the past year for me. I went from a full-time college student to a full time employee, traveling the world and dedicating myself to my industry and career. I read fewer horror and fantasy novels, focusing instead on nonfiction, history, and art publications. I wear less winged eyeliner and fewer ankhs (although, casualty of working in the art industry, I wear just as much black.) My music taste has expanded, my circle of friends has expanded even more. 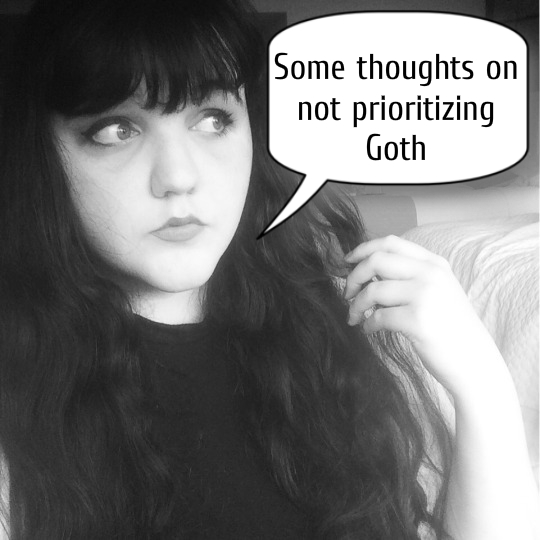 When I choose to describe myself, Goth is never as high up on the list as it used to be. It's always "art dealer, traveler" first.  I reflected on this recently while making a social media profile. One of my colleagues from work called me a Goth once and I actually kind of jumped, I don't think I'd ever mentioned it specifically to her.

People age with Goth differently. Some people, yes, grow out of it. It's not a shameful thing to do. Other people hold Goth near and dear to their heart well into their old age. I seem to be pitching my tend somewhere in the middle.

I started out in Goth in my younger teenage years. My mother has always loved alternative music, from metal to Goth, and I remember coming home from school and hearing her and my aunt listening to Bauhuas. I started exploring forums about Goths, always struck by how rude some of these older, crabby people were and how defensive they were about "their" subculture.  Now as an adult, I think if I saw a thirty year old speak to a fourteen year old the way some of them did on those forums back in the day, I'd scream at them. I was a kid, in love with this incredible amazing subculture and shocked at how adults could act towards other people my age. I did a lot of lurking, not much interacting, and developed an ingrained anxiety about being seen as a poser.

I never had to "push" liking Goth things. For me, liking the music, the style, the literature, the decor, always came naturally. But as a younger Goth, I do think I had to try harder to suppress my love of other things for fear of being called a poser. I listened to only Goth music, ditched pretty much all my other clothes, and only enjoyed books that other Goths seemed to approve of.

Fast forward to August 2011, when I started this blog in my junior year of high school. I've done a lot of growing in the mean time, my confidence has grown in more areas than one. One of the main things I thought when I started this blog was that I would make sure the next generation of Goth teenagers knew that there was no such thing as being a poser, that they could enjoy Goth however they wanted to. I can't count the number of elitist e-mails I've gotten telling me I'm spoiling Goth, but they swiftly get deleted. Fuck that noise.

The most common question I get asked on this blog is "How do I be a Goth?" The answer is always Here is a list of Goth things. If you like some of them and want to call yourself a Goth, you're good to go. It's followed closely by "Can I still be Goth if..." insert whatever qualifier you care to name here. The answer is always yes.

Some might think that this post sounds an awful lot like "I'm leaving Goth." But that's not it at all. The fact is, the older I've gotten, the less I've worried about seeming Really Goth. For me now, Goth is an aspect of who I am rather than something I feel like I have to work at to appease anonymous fuckwits. ,And, that's made me enjoy it more than I have in a long time. When I let Bauhaus mingle in my iTunes with Adam Lambert, Postmodern Jukebox, Tool, or whatever else, I actually enjoy it more when my beloved Goth music comes on. I can dance harder, knowing that Goth is a part of me that I'll always love, and that I don't have to worry about being called a poser when I dance just as hard for Kongos.

Looking forward? Who knows. I do have some travel plans that include some incredible Gothy locals, and maybe as I move up I can incorporate more Gothy elements into my style, but I'm not going to force it. I'm content to be what this blog has always said I am--an everyday Goth.

Goth gets better the less you worry about it. Who knew?
30 comments:
Email ThisBlogThis!Share to TwitterShare to FacebookShare to Pinterest
Labels: personal, the scene

The most common complaint I see from other Goth bloggers (and that I used to have myself) was about how one could possibly generate content consistently for years and avoid unannounced hiatuses where you post. I've written before about how to generate ideas for a goth blog, but sometimes having tons of ideas and no plan about how to execute them can be exhausting. Since it's easier to give it a bit of forethought and plan ahead than it is to dig yourself out of one of these post breaks (if you ever decide to return to blogging), so in this post I'll outline the simple way I ensure I have content for weeks to come. 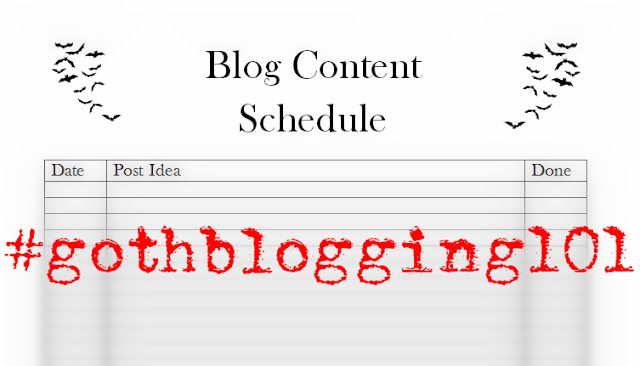 So, here's a little secret for you: For the past few months, this blog has been running on posts that I batch-wrote back in May. In the course of a few weeks I wrote over fifty posts for this blog so that it would never run out of content if I became busy with work and couldn't write at the time. How was I able to do this? 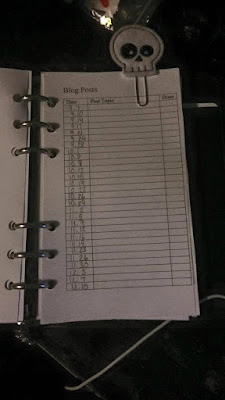 A blog content schedule was absolutely indispensable for me. It's a schedule of every single day that I want to have a blog post up (for me, Wednesdays and Saturdays) for a six month span. Depending on how often you post, you might decide to go further into the future.

I keep mine in my planner (bookmarked with an adorable skull paper clip), and here is a look at what mine looks like before it gets fully filled out. When I set up this content schedule in my planner, I take some time to start filling out what I would like to post when, keeping in mind holidays and special events which I might like to make posts about.

Filling out the content calendar can seem daunting at first, but having an eye on everything makes it infinitely easier. For me, looking at the dates easily triggers ideas: Oh, the fifteenth is my birthday, so I know I'll have an OOTD that day or, I always have a Monthly Favorites up at the end of the month or I want to do a post-a-day for October so I should plan ahead now. Don't forget Goth-specific holidays and events. You'd be surprised how quickly the content calendar fills out with your ideas.

You can stop there with the content calendar, or you can also pre-write posts and have them on hand if you ever run into one of those Nope, can't do it blogging weeks.

Pro-tip the first: Write in pencil. Don't feel obligated to stick with a post if something new and exciting comes up that you want to blog about it. Just erase the post idea and reschedule it elsewhere.

Pro-tip the second: If you don't get to writing some of the posts in your schedule (you didn't have the time, you didn't feel inspired, you didn't have everything you needed), keep the schedule on hand. You can always use it as a free idea bucket down the line.

For my goth bloggers out there, how far ahead do you plan your blog posts? Do you keep a backlog for when times are tough and blogging just feels completely impossible?
14 comments:
Email ThisBlogThis!Share to TwitterShare to FacebookShare to Pinterest
Labels: blogging

For blogging purposes, I keep a record of the search terms that people use to find my blog. It's great for keeping track of trends and helps me deliver better content when I know what people actually want to read. Some of them, though, are just fucking funny. 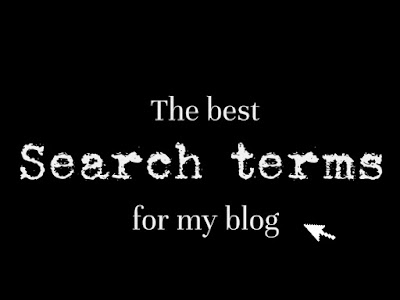 So, here are the best search terms real people have used that landed them on my blog: