People I meet always seem shocked by the number of movies I've managed to not see. Many film classics have just slipped me by because 1) I don't have the patience to sit through many movies and 2) I can't seem to keep track of my list of films to watch.

Some of you may know that I've been a long time lover of Goodreads, the website that lets you track your reading. You can set a goal for a certain number of books to read in a year, join groups to discuss books, create shelves to organize what you're reading, keep a track record of all the books you've been meaning ton get into, and get recommendations based on the books you really love. It's one of my favorite websites, even if I sometimes fall behind and don't read as much as I would like. For a while I've searching for a website that does something similar for movies and television, and recently I stumble on Letterboxd. 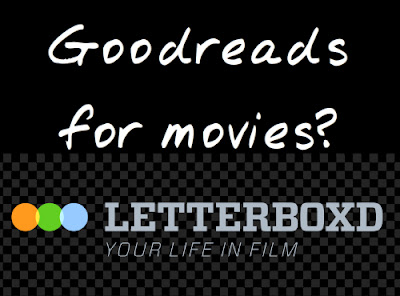 Letterboxd doesn't have everything that Goodreads has. There's no effective recommendation algorithm, so you're basically on your own finding movies that appeal to you, but that's where user-made movie lists can come in handy. Just searching for a key term, say, "horror film" will come up with people making lists of horror films, or even more specific ones, such as Japanese Horror Films, Slasher Horror Films, etc.

You can review movies, giving them 0-5 stars (with half stars) and adding your commentary. Since the site attracts film buffs, some people's reviews are pretty good reads, too. What I also liked is that, no matter what review you give the movie, you can also indicate separately that you enjoyed it. So, a dumb movie that was terrible in pretty much every way but which you nonetheless enjoyed? Just like it. 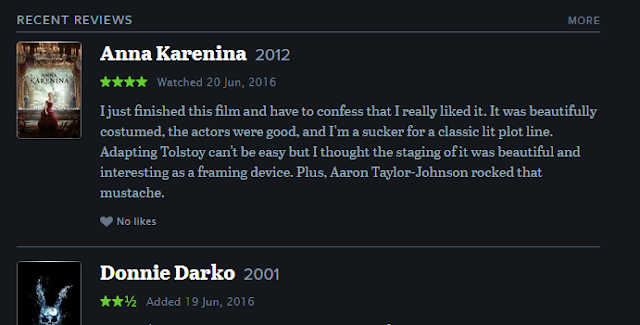 If you want you can follow my movie list on Letterboxd here! Do any of you use Letterboxd? How do you keep track of the movies you've been meaning to see? What was the last good movie you watched?

Email ThisBlogThis!Share to TwitterShare to FacebookShare to Pinterest
Labels: movies