"Gothic to Goth: Romantic Era Fashion & Its Legacy" at the Wadsworth Atheneum

Yesterday, two of my good friends and I decided to take the forty-five minute drive to Hartford, Connecticut to see an exhibit at the Wadsworth Atheneum entitled Gothic to Goth: Romantic Era Fashion & Its Legacy. One of my friends had actually heard about it from the curator during the planning stages a few years back, so we were excited to see how it actually panned out.

To preface this, I'm not only a Goth (as evidenced by this whole blog,) but I'm graduating in a week with my BA in History and Art History. One of my biggest areas of interest is the Gothic Revival during the nineteenth century, and after a couple of years of working I will be returning to graduate school to pursue a Masters and then PhD. So, I have double-vested interest in this museum exhibit. Just thought I would put all my cards on the table before we begin. 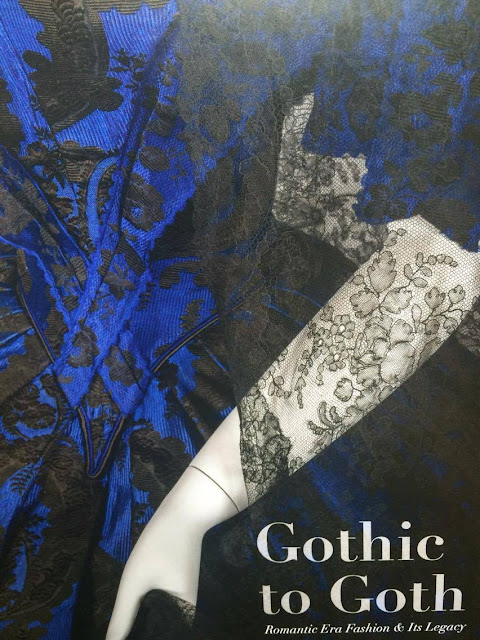 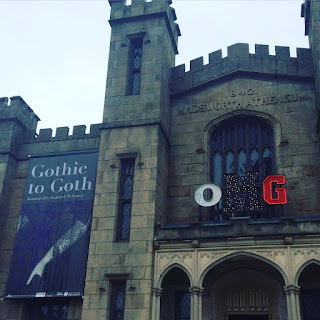 The Wadsworth Atheneum is a museum which houses lots of different kinds of art, from pre-Medieval all the way up through contemporary. It's housed in a neo-Gothic, castle-like building on Main Street in Hartford.

(The "OMG," as I later discovered, is not just tacky signage, but also an instillation by a contemporary artist Jack Pierson. The website calls it a "colorful and engaging addition to the museum’s historic, Gothic-revival façade." I call it tacky, but what do I know.)

It has really nice galleries as far as I can tell, and I enjoyed wandering through. The Gothic to Goth exhibit is on the third floor. We started there and wound our way down through the rest of the exhibits. 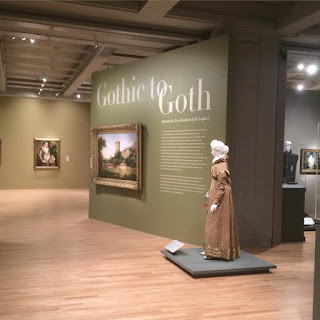 No photography was allowed in the exhibit. Fortunately, I have a propensity for breaking the rules (especially stupid ones, but more on that at a later date) and snapped a couple of photos. If I get tracked by the FBI and have to remove these photos, sorry in advance.

The overall space was a little bit confusing to me. It wasn't chronological, but it also wasn't entirely thematic. It seemed to sprawl, taking paintings from the first decades of the nineteenth century and sitting them alongside dresses from the 1860s. There was very little sign posting about where you were supposed to begin or end (and you could entirely work backwards, if you didn't have any idea what you were doing.)

Also, it seems weird to me to title the exhibit "Gothic to Goth" and not talk about, you know, actual Gothic art from the Medieval period, but what do I know. 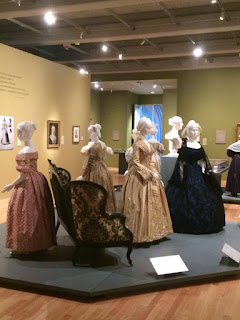 Side note: the dress that they use in the promotional shots, the blue and black one, is one of the most gorgeous dresses I have ever seen, hands-down. It also has an amazing Chantilly lace shawl with it from 1850 and I am stunned that it is in such good condition. Honestly the exhibit was worth $5 for me just to see that dress.

So, I have quibbles about the lay out and the history, but then again I've worked in museums before and I like history, so for other people that might not be as big of an issue. If you're just here to see examples of gorgeous clothing and art, you'll probably enjoy the exhibit. We all loved looking at the clothing and art regardless of the way it was presented.

Except, for readers of this blog, the "Goth" bit.

The exhibit wraps around in a circle and ends with talking about modern Romantic Revivals, which was a tiny room with very little context whatsoever. There were Steampunk pieces, two Alexander McQueen dresses, a painting from the 18th century (again, what the hell is chronology?), a dress by Helene Hayes, and two "Goth" ensembles." 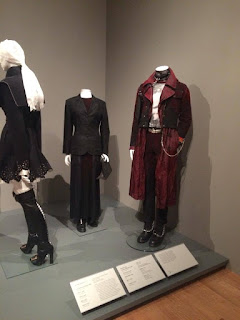 You know when you're watching one of those videos (probably by Buzzfeed) where someone who is not a Goth tries on Goth clothing and it never looks quite right? Even if they were wearing something that a Goth might conceivably wear, something about the styling makes it seem off? That's what these were like. They were assembled by Jean Paul Gaultier of all people.

Something about them is weird to me, possibly because they're so unrepresentative of Goth fashion as a whole? Rather than showing the diversity of Goth looks (or even the earlier 1980's ones that were more punk inspired), we see these. There's also very little mention of the music or political history of Goth, which I feel misrepresents the subculture. I probably wouldn't be as bemused by them if it weren't for this, excerpted from the catalog:

"Intertwined with the New Romantics, Goth reached its height in subculture fashion in the mid-1980s. Although Goth street style has since faded, some followers remain loyal, and the fashion aesthetic has never disappeared."

Hm. Okay. Goth "reached its height" in the 1980s, "faded," and only has "some" loyal followers. Right. Totally makes sense. 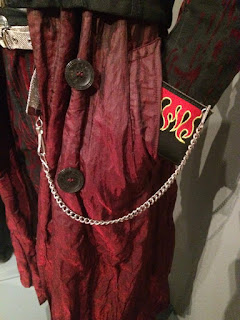 Also, now I'm nit-picking, but Jean in all his glory decided to add this Hot Topic wallet to the ensemble on the right and it clashes so much and is so desperately mall-Goth that I'm laughing.

Do I seem bitter or annoyed in this post? I don't really mean to, but I remain somewhat disappointed by the representation of Goth here. Goth has been represented in a lot of museum exhibits, including Gothic Dark Glamour at the Metropolitan Museum of Art which I own the accompanying book to and which I feel accurately captured so much of the subculture. So, academics and curators outside of Goth can write about Goth, but the curators of this exhibit chose not to. And that's sad.

So, would I recommend it? That entirely depends. If you want to see gorgeous period clothing, learn something (but take it with a grain of salt) and laugh a little about the continual misrepresentation of Goth, yes. I had a good afternoon out at it anyway, and I'm told the Wadsworth has free admission hours. So, if you're in the area, it might be worth it to you! (Also, I'm a sucker and bought the catalog, so evidently I was not so offended by it as maybe I seem now.)

Gothic to Goth: Romantic Era Fashion & Its Legacy runs until July 10, 2016. If you want to learn more, you can read about it on their website there.

So, would you go to this exhibit? If you were in charge of a museum exhibit about Goth, how would you go about it?