My boyfriend and I have been dating for about four months now and he recently told me that gothic girls have always been his "type". We have a good relationship so far but hearing that kind of made me uncomfy. How can I tell if he's dating me because he just wanted to date a gothic girl or if he really likes me? 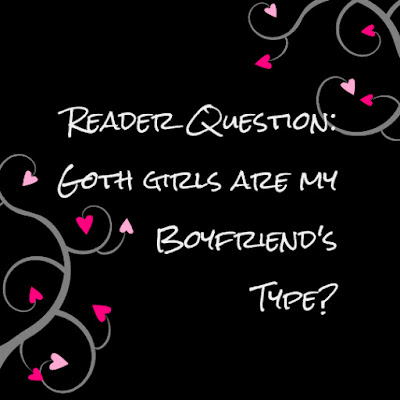 Hello, and thank you for writing in.

Personally, I wouldn't be concerned about that. I feel like I'm forever dating people who had childhood crushes on Sam Manson, Lydia Deetz, or other Goth girl characters. It's not uncommon for people to date people who are their preference, I do for my own (Nerds. Basically.) and it doesn't mean that they're just dating some for fitting their preference, not because of who they are. If your relationship has been good so far, there's no reason to end it now because your boyfriend likes Goths in general.

The only reason I could see for ending a relationship under those circumstances is if you started to feel that your boyfriend only was with you because you're a Goth. Does he pay attention to those aspects of you that aren't so spooky? Is he okay with it when you're not dressed to the nines in your Goth wear? Do you have other mutual interests that your relationship is based on? Does he respect you and treat you well? If so, you're good to go. If not, that's when I would start to question your boyfriend's motives.

Readers, would it bother you for your significant other to say that you fit their general "type"? Would it be fetishizing or just normal?