Benefits of Being a Lone Goth

I get a lot of reader mail especially from younger Goths bemoaning the lack of a scene where they live or an avenue to meet other Goths. It used to be something I worried about more, but as I've grown older I've come to be more comfortable in my identity as a lone Goth. Not to give the impression that I don't have friends, but I don't actively seek out other alternative types near me to hang out with over, say, someone who is non-Goth but has other similar interests to mine. Sure, there are some downsides to this, but overall I think there are also some benefits of not being terribly involved in the local scene. 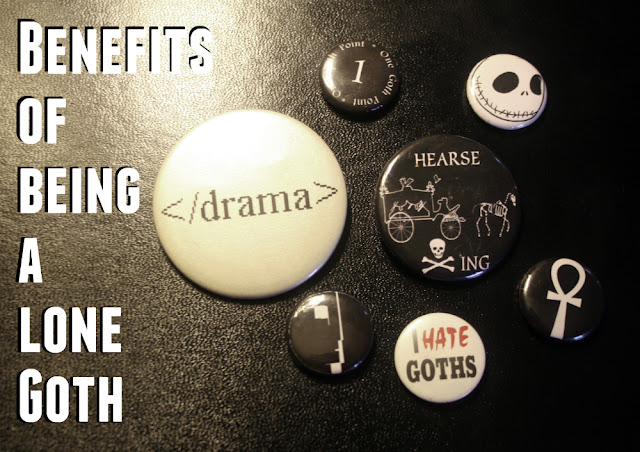 Note: most of these are generalizations and if you have a great group of Goth friends, these might not apply to you.

No Pressure to Perform

Maybe you don't feel like dressing to the nines in your spooky attire one day, and that's perfectly fine. When you're around a community of other Goths, even if you're quite close to them, you can feel the pressure to be Extra Goth all the time to either keep up or compete with them. Lone Goths don't have this problem as much and can feel free to run to the grocery store without needing to tease up their hair or slather their face in makeup unless they really want to.

It's certainly not impossible to avoid in-scene drama as a Goth, but where there are other people there are bound to be spats about who is dating whose Ex or who spread some rumor about someone else. Being a lone Goth means avoiding all of that drama from the get-go.

Hand in hand with Drama comes Elitism, his best friend and mentor. Since the beginning of the scene there have been people in local Goth hangouts who judge other people for not living up to their definition of Goth. Luckily, lone Goths don't have to deal with Elitists clucking their tongue at them for being a "poseur" for liking so-and-so's more recent album, or whatever.

No Defending Other Goths

This happened to me in high school when I felt like I had to take responsibility for the hoodlum-like behavior of a number of other alternative types. Being more of a lone Goth in your small town or community means not having other people saddle you with the behavior of people who share your fashion sense and not having to defend the entire Goth in the eyes of the general public. As long as you're well behaved, it's much easier to give the entire subculture a good rep on your own.

Do you consider yourself part of your local Goth scene? If not, what are your favorite and least favorite aspects of being a lone Goth?
Email ThisBlogThis!Share to TwitterShare to FacebookShare to Pinterest
Labels: the scene