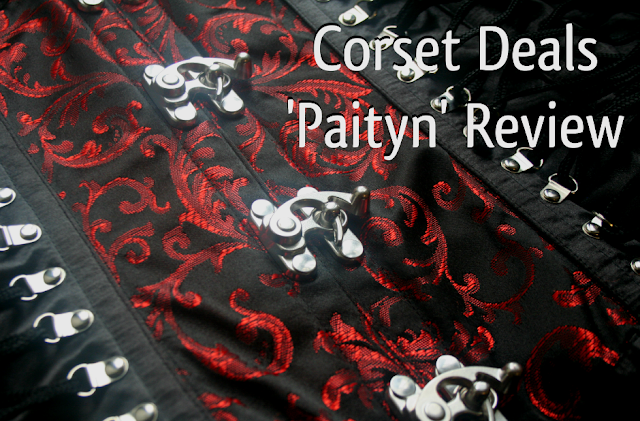 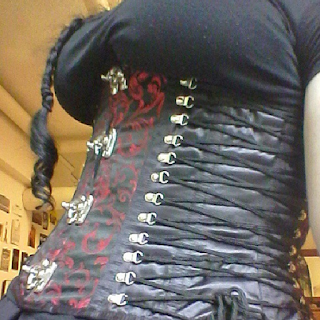 I've been experiencing a bit of a resurgence in my love of corsets lately, especially wearing them as (surprise!) undergarments. I love the silhouette corsets give me and the security, like a nice steel and brocade hug. I now own six corsets of various designs, the latest of which is from the lovely folks over at Corset Deal. I had purchased two corsets from them in the past (a beautiful blue and pretty silver brocade corsets) and I've been pretty impressed with the quality for the price. Not too many places have great corsets for under $40 and two-for-one sales on so many designs, which is great for budget-conscious goths. So when they reached out and asked if I wanted to review a corset from them, I was thrilled to say yes. The corset I chose was their Paityn Gothic Corset, which is a gorgeous black and red brocade corset with buckled front, steel bones, and beautiful side lacing. 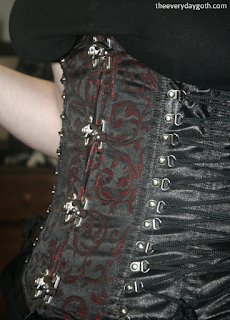 Now, this isn't a corset that can really be worn under your clothing so scratch that idea from the start. The buckles at the front would create very strangle lumps and the side detailing isn't exactly subtle, but I've been loving this design since I got it. The silhouette it gives is beautiful and it's unlike all the other corsets that I own. If you can ignore my t-shirt peaking through the front busk there (totally my fault, not the corset's, by the way) you can see it gives a really nice concave swoop to my figure which looks utterly fantastic. It'll probably be making an appearance during Red and Black week, that's for sure.

The sizing is exactly where I expected it to be, I generally order a 34" waist and this corset sits in line with others of that range. For a steel boned corset, the regular retail price of $65 on the website is very reasonable, not to mention all of the sales and deals that Corset Deal offers on a regular basis.

The most interesting detail to most people is probably the front clasps. Now, yes, they're gorgeous, sturdy, and unique, but I do have to warn you all that they make the corset approximately ten times more difficult to get on than any other standard busk corset I own. Could this just be my own incompetence? Maybe, but I'm sure I'm not the only one. I'll show you what I mean when I say it's difficult: 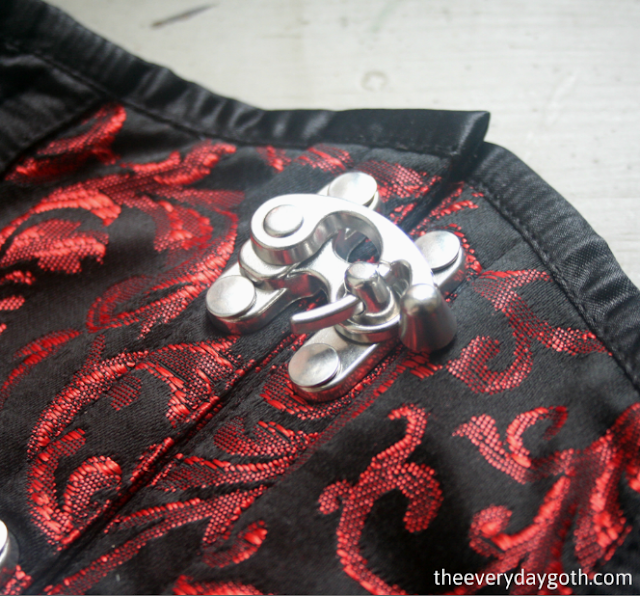 This is the buckle closed. 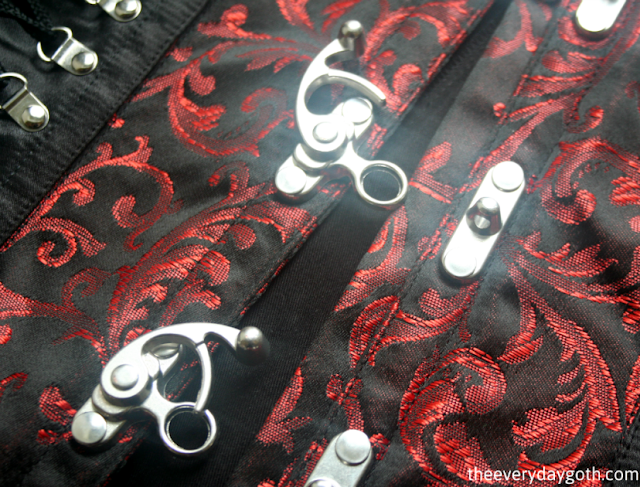 And this is it open. Now, to close it you pass the bottom circle over the stud in the other side of the busk (which has another hole in it.) Once you pass the large circle over it, you push the top clasp down to close it. Perfectly simple when the corset is lying flat on my windowsill for pictures, less so when on a human body which has lots of curves that make getting the busks exactly parallel to work the clasp difficult, especially if you're trying to see what you're doing over your chest (ahem.) 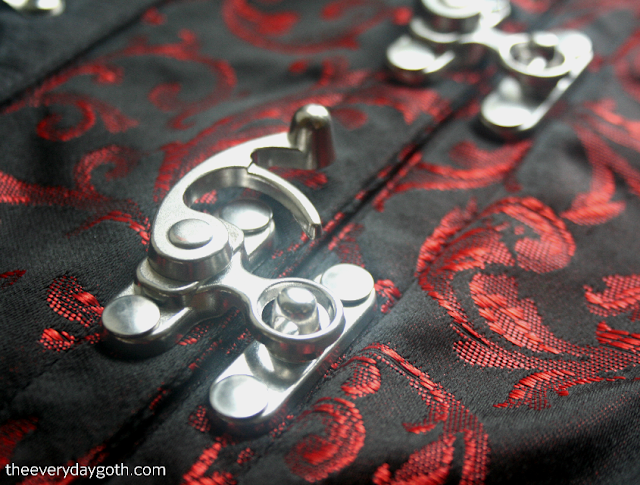 I don't want that to put you off, though, this corset really is positively beautiful and I'm so glad to add it to my collection. Taking an extra minute or two to put it on doesn't stop it from looking fantastic. Expect to see it in a lot of outfits in the future.

If you want to buy your own Paityn corset, you can find it on Corset Deal here. Be sure to also check out their 2 for 1 deals and their Halloween sale! I think the next time I order from Corset Deal I'm going to look into the Granville, the Tristain, the Bemelle, or the Bannan.

Do you own a corset? What is your favorite design?
Email ThisBlogThis!Share to TwitterShare to FacebookShare to Pinterest
Labels: Clothing, Corset, Corset Deal, review