The internet first started buzzing about Crimson Peak when costuming shots surfaced and everyone saw the delightful leads Tom Hiddleston, Jessica Chastain, and Mia Wasikowska in beautiful period dress. Then set pictures. Then the director, Guillermo del Toro, mentioned that it was a gothic romance rather than straight horror. By this point, I was super excited to go, so this Saturday my friend and I loaded up our purses with candy and went to go see it.

Without spoiling too much, a young woman named Edith Cushing is ferreted away to a creepy mansion in England with siblings Sir Thomas Sharpe and Lady Lucille Sharpe. Ghosts ensue.

So, is it worth seeing? 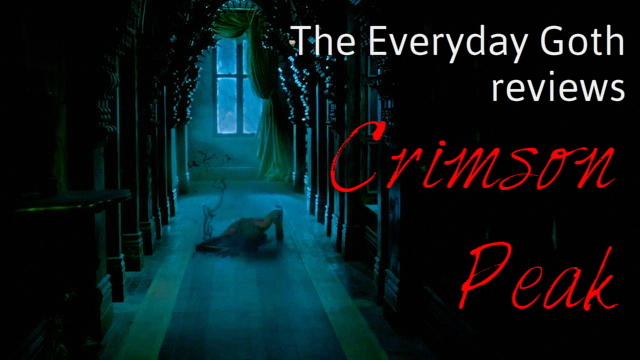 Well, it depends. You see, Crimson Peak was conceived of (at least, in my view) for a very specific person.

If you like Gothic novels such as Jane Eyre, The Monk, The Castle of Ontranto, Wuthering Heights, and Rebecca, yes. If the cover art of trashy Gothic romance novels with heroines swooning about  in billowing white nightgowns near creepy castles is part of your aesthetic, yes. If you've always secretly (or not so secretly) wished you lived in a crumbling gothic manor house, yes. If you have a soft spot for wounded characters and would like to gather them to your chest and soothe their sorrows, yes. If you love period costumes, yes. If you are content to see something very pretty regardless of its faults, yes.

If you want truly gripping horror, no. If you want a plot that innovates at every turn, no. If you hate being able to guess what the next move will be, no. If the misogyny of early gothic literature upsets you, no. If you want characters that act in believable, realistic ways with coherent motivations, no. If blatant symbolism turns you off, no. If the sight of Tom Hiddleston's ass makes you want to run for cover, no. 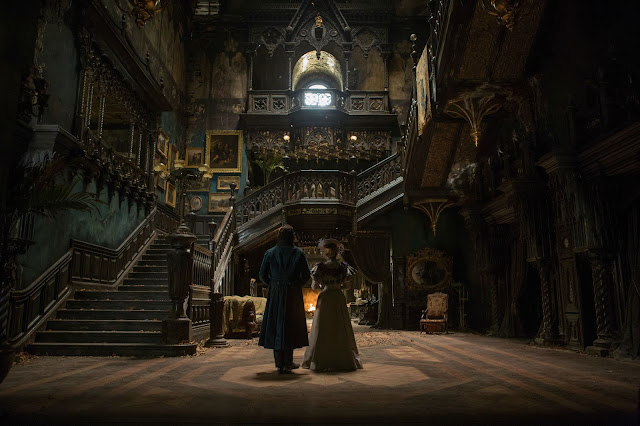 That being said, I was the perfect candidate for this movie. My favorite novel for many years was Jane Eyre and I had more of a crush on Mr. Rochester than perhaps was reasonable (yeah, yeah I know.) I spent the entire movie happily swooning at, not the campness, per say, but the movie's success at reviving the turn-of-the-century gothic. I could guess every move and I didn't mind because, like watching a familiar ballet or listening to a rendition of a favorite tune, I can still appreciate brilliant execution.

And, okay, Crimson Peak doesn't break new ground but that doesn't make it any less brilliant. It's easily the most beautiful movie I've seen in a long time. The rich contrasts of gold, turquoise, and red, highlighted by white and black, give the entire movie a very emotionally charged atmosphere. The acting from the leads is wonderful. The costumes are stunning (read more about the costume philosophy here, if you like.) 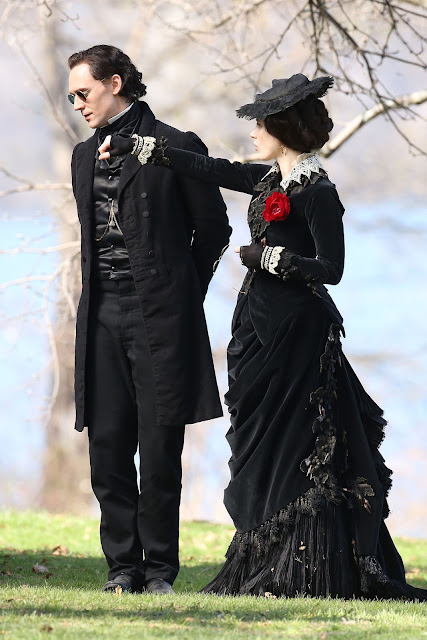 Am I blinded by my own preconceived tastes? Of course. As I said, this movie is made for people like me. And I'll forgive these flaws because I recognize them from the source material, the original gothics, which are flawed and over the top and everything modern minimalist clean storytelling isn't which is part of what makes the gothic genre so beautiful to me. I've heard the film be called a "modern gothic" which isn't true at all, but it is a pretty great synthesis of the fin de siecle gothic mode. 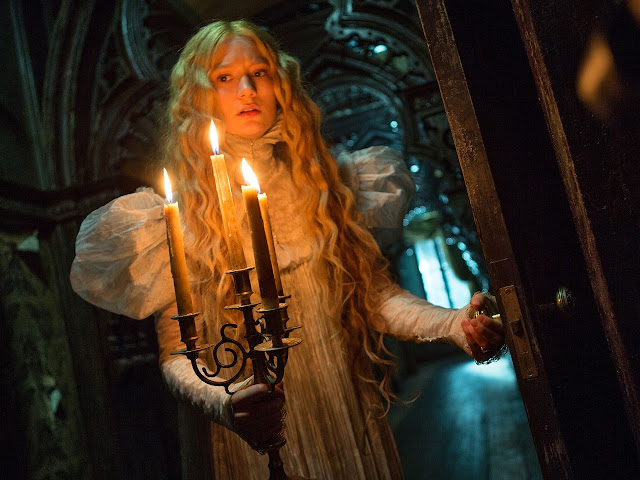 Have you seen Crimson Peak? What did you think?

NOTE: the comments of this post are a completely spoiler-friendly zone, don't read if you don't want it spoiled!
Email ThisBlogThis!Share to TwitterShare to FacebookShare to Pinterest
Labels: review