How to Avoid In-Scene Drama

Goths are a bit of a dramatic lot, you have to admit. It's inevitable for any kind of small community to attract dramallamas but especially so for a subculture who mainly meet on the internet, in school, or in clubs. Add to that our propensity for snark and sarcasm and for being slightly, well, melodramatic, and you have a recipe for in-scene fighting. But what to do if you're a darkling who just doesn't want to be involved in any kind of scene drama? Here's a handy guide. 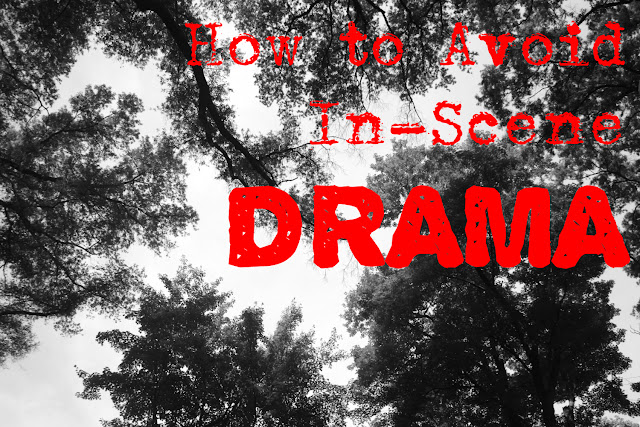 You would think this would be quite obvious but evidently not. Not all drama starts with a big fight, most of it starts with much smaller incidents. Gossiping and snide comments, if heard by the wrong person, can blow up more than you would expect. Generally speaking, be kind to others, don't judge without understanding, and treat others how you want to be treated.

If two people you know have gotten into a fight, try not to pick sides. Most of the time this drags you into a disagreement you have nothing to do with and just reflects poorly on you. If the argument is as childish as most of them are, it really isn't worth it. Yes, this might lead to tension if both of them are your friends, but it's better than possibly losing a friendship because of it.

If the two people who are bickering can't seem to come to a conclusion, don't try to broker it for them. This gets you involved in drama that has very little to do with you unnecessarily and, if the situation continues to worsen, you'll just get dragged down with it.

Most of the time you'll be able to spot people who are prone to drama from a mile away. Common symptoms include going through friends or relationships quickly, prolonged breaks from the community, loud gossiping or rumor spreading, being banned from local clubs, etc. Avoid these people when possible and stay out of their muck.
Pro-tip: Pay close attention to the people that loudly complain about drama in the scene. They tend to be the ones that start drama (or at least escalate it.)

There are going to be times when you really do need to intervene in a bit of drama, to defend someone or to stand up to someone else who is being toxic. Most of the time, however, it won't be worth the additional stress that in-scene fighting will bring, or the hit to your reputation. Know the difference between a situation that requires you to get involved and one that you can watch from the sidelines.

If you decide you need to get engaged in a situation, be careful. Make sure you fully understand the situation at hand and, when dealing with the other parties, stay on track. Insulting people on a personal level or resorting to petty insults to try to save face isn't productive.

After the situation has been dealt with, try to exit with grace. Either extend the hand of friendship and try to patch things over or keep your head high and don't re-engage. Once the fight is over, don't hold grudges over it. If you were wrong, apologize with sincerity. Give the people who were involved in the fight some space. Move on.

That being said, when you know this isn't a battle you need to get involved in...

The best thing to do to avoid scene drama after you've decided not to engage in it is to completely ignore it. Not just directly, either. Avoid gossiping about it (even online), don't act passive-aggressively to the people who were involved, and try to pretend it's not happening.

How do you avoid drama in your local scene?
Email ThisBlogThis!Share to TwitterShare to FacebookShare to Pinterest
Labels: the scene