Reader Mail: Parents Who Don't Get It

Heyllo Mary!My name is Isabelle but most call me Issa. I am 15 years old and just this/last year I've finally realized (more like an acquaintance did) that I am Goth. Long story short: since 5th grade, others have considered me emo & I thought I was myself but I was wrong. After 4 years, that's what I thought I was but it didn't feel right. Then a girl I knew asked me if I considered myself goth (she is goth too). It just hit me. So from then on, I researched the Goth subculture and became even more goth (as best as I can & here is why).My parents think that goth is abnormal, depressing, and just all about wearing black. They don't see the beauty that comes from it, and for me, it's the reason why I have always looked at the world from a much better (& complicated) perspective. At one point I was done being emo and just considered myself in the alternative lifestyle. But the more I read about it and see people who are Goth, I fell in love and knew that this is what I am (& always was, I just didn't know it yet). The thing is, while I don't really know how to be Goth (so I don't look like a poser to others), my parents don't even approve of this lifestyle I have chosen. Besides what they think about it above, overall they think it's silly and a phase that I'll get over because "it's impossible to wear black all your life." I don't know how to make them understand. And yes, I should talk to them but I tried and they keep shutting the idea down. What I found out the best way to do, is to slowly slip a bit of Goth into my daily life. It's my interpretation of them accepting it (for the moment) so what else could I do to be goth while still in the "accepting" zone? I know I can already wear all black clothing, but what else?Also, I have an Instagram @tipsforgoths, because it helps me thinking I'm helping others as well as helping myself. It's more of helping with their appearance at the moment, but it'll get deeper into history and such with time as I learn it too. Anyways, if you checked it out, you're my inspiration at the moment, so I gave you credit for them on my posts. If you don't like it, I'll take them down immediately.Currently, I am on your blog reading things to help me. Sorry for the long letter but I hope you could respond, by post or email, it doesn't matter. (& I haven't seen a post about dealing with non-goth parents so if you already have one up, sorry because I haven't reached it yet). Thank you for your time(: xx Issa 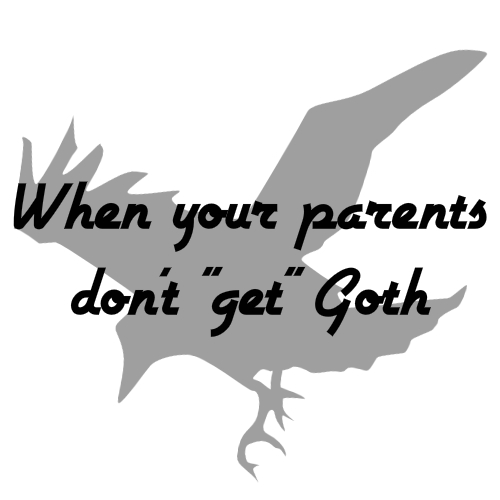 Hello Issa, thanks for writing in.

It sounds like your parents are doing the same things that many people's parents do when they express an interest in the darker side of life: being dismissive of it. In our teenage years this can be pretty difficult to hear, since this is the age that we do a lot of identity-forming, so I understand your frustration. That being said, it really isn't the end of the world.

My advice would be not to make a huge deal about becoming Goth but rather just express it as a part of your personality and let them get used to that. There doesn't need to be a big "coming out" to them, so don't try and worry about that as much.

You may never be able to convince your parents that being a Goth is the "real" you, but you can ask that your parents accept it and not make rude comments about it. Don't act very defensive if, say, you're buying a black dress and your mother asks "Black again? You can't wear all black forever, you know." Rather than responding by saying "Yes, I will, I'm a Goth, it's what we do" you could say something like "Maybe not, but it's what I like right now." By framing your clothing choices as your own personal style decision (just like any teenage girl who goes through an Ugg boots phase) rather than being insistent that this is who you are, you can hopefully avoid that kind of conflict.

As for how you can express your Goth side outside of wearing clothes (which don't actually have to be all black), listening to music is a big first step (I have a Babybat Starter Pack playlist with lots of Goth classics here and there are online radio stations like Cathedral13 you might want to look into.) You can also look for goth-favorites at your local library. Older Gothic works such as Edgar Allan Poe's poetry and short stories and Bram Stoker's Dracula or newer works by Neil Gaiman and Gail Carriger are quite popular. I have a "For-Goths" bookshelf on Goodreads with books I think Goth-y types might like, so be sure to check that out.

Other Goth activities you might be interested in include visiting cemeteries, watching beloved Goth movies (horror and vampire films are a favorite, of course), writing poetry or drawing, blogging, or learning a new DIY technique for your spooky wardrobe. You're a bit young for clubbing (at least in my part of the world) but when you turn 18/21 you might want to look at events in your area.

Readers, how do you deal with unaccepting parents?
Email ThisBlogThis!Share to TwitterShare to FacebookShare to Pinterest
Labels: Parents, Reader Mail, Young Goths