Hey guys! Today's midweek post is just a quick excuse to say hi and show off an event that looks like tons of fun. The Metropolitan Museum of Art, one of the biggest and best art museums in the United States, has a new show up starting from yesterday called Death Becomes Her: A Century of Mourning Attire. 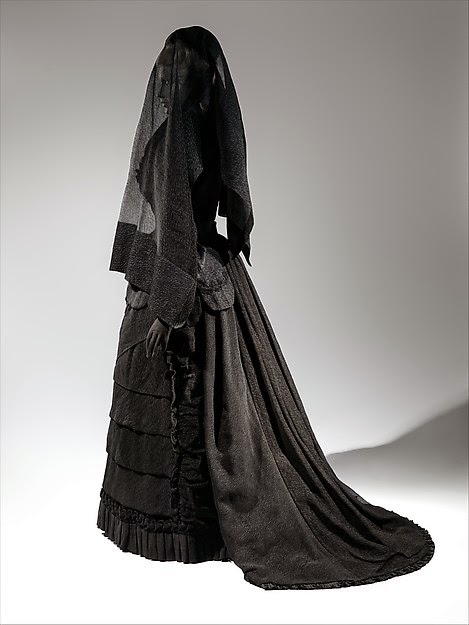 
Here's a quick blurb from the press release:

The thematic exhibition is organized chronologically and features mourning dress from 1815 to 1915, primarily from The Costume Institute’s collection. The calendar of bereavement’s evolution and cultural implications are illuminated through women’s clothing and accessories, showing the progression of appropriate fabrics from mourning crape to corded silks, and the later introduction of color with shades of gray and mauve.


I've posted about the Met's collection of gothable clothing on this blog before, but it's worth noting that they have a fabulous collection and this show looks like it's going to be great.

If you're interested in seeing the exhibition, it is running from October 21st to February 1st of next year. Obviously I'm in Scotland for the moment, but I'll be visiting the states in January so I might be able to pop up to New York while I'm there.

Would you go see the exhibit? What do you think should be included?
Email ThisBlogThis!Share to TwitterShare to FacebookShare to Pinterest