Reader Question: Can one stay a babybat?

I just read your post on evolving from being a babybat, and I have a question.
Do I have to evolve into a fully fledged goth or can I just stay a babybat? I know that sounds like a silly question. The thing is I have always liked the goth subculture but I don't think I could ever become fully immersed in it. I don't particularly *love* most goth things, and I don't feel like the term goth could ever describe me properly. I have been influenced mainly by my metalhead friends so I like that sort of music, however when I read goth blogs and websites they mention bands that I'm not entirely interested in. And I don't want to be considered a metalhead for personal reasons I have with that subculture. I've also looked into emo and I definitely don't have the personality for it, it's also way too cutesy for me, though I might like few songs associated with it. I read up a lot about goths and I like the general idea of it, the darkness, mysterious, the clothes, expressing one's self, being considerate of others and accepting, being different and quirky and edgy, the supernatural and fantasy. I have a real appreciation for dark alternative subcultures.

I guess the term babybat makes me feel like I can be in between 'normal' and goth with permission to mix it up with things from other subcultures. I like the idea of being semi-goth (kind of like how some people see Evanescence, goth but not goth. Evanescence is my favourite band so that might give you some idea of why would associate with babybat and not goth.) However, in the future I might discover some goth music that I like but that doesn't mean I will want to be a complete goth after that.

So I was wondering what your opinion is on me wanting to call myself a babybat forever (or untill I decide I no longer need the label)? 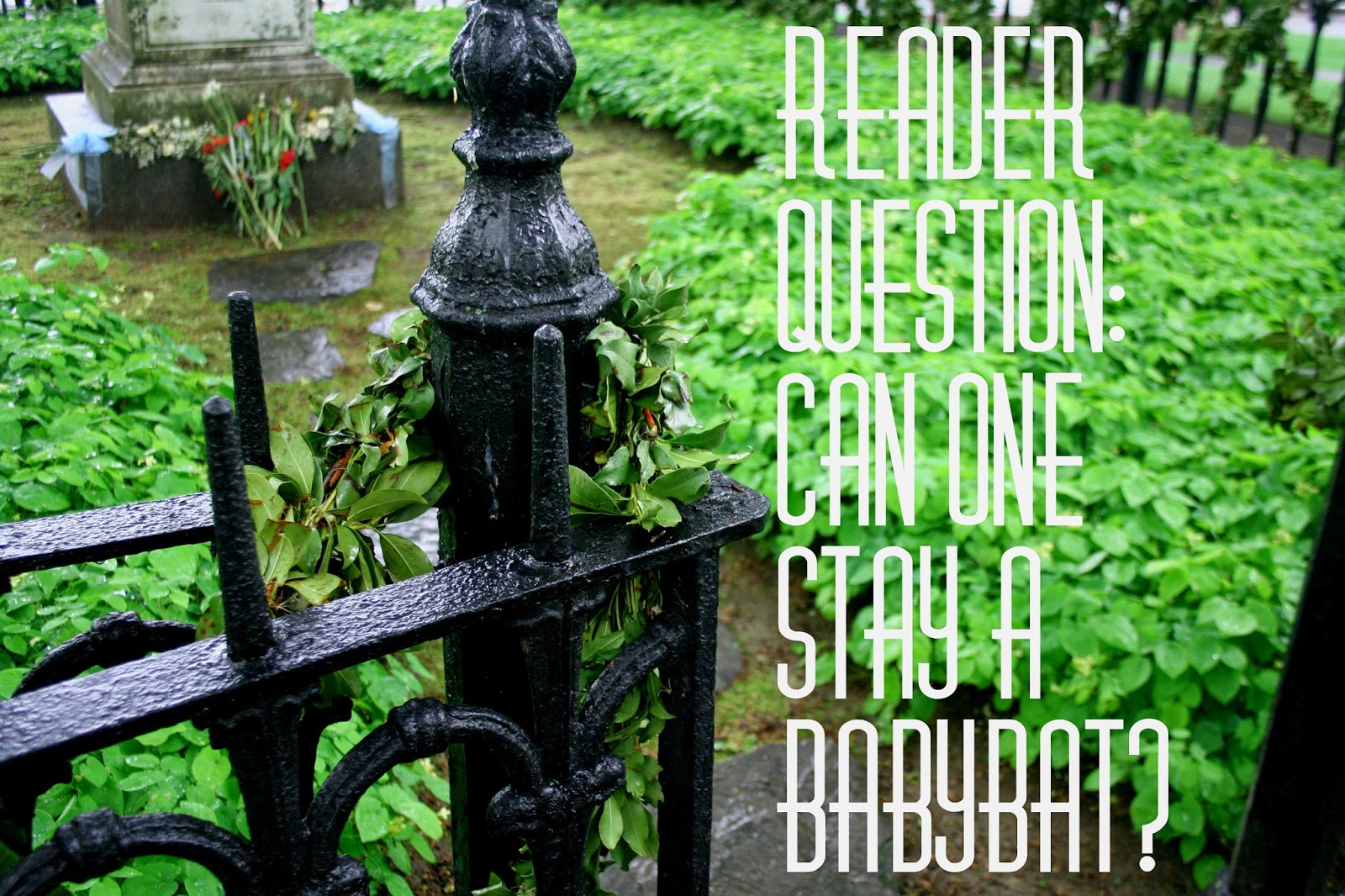 First, I'd like to challenge the idea that a babybat has to be of a particular age. Many of the questions that I get from older Goths that are new to the subculture seem to center around the idea that they are "too old" to be a babybat. I'm in the camp of thinking that a babybat is a person new to the subculture, and that it's association with younger people comes because A) many Goths join the subculture when they are young and B) the word "baby." So, yes, I believe it's okay to call yourself a babybat at any age.

But, I am confused by the idea that being a babybat is a step between normal and Goth. If your interests lie outside the Goth subculture, then identifying as a babybat isn't going to bridge that gap, so to speak. It's perfectly okay to like a subculture but not become a part of it (of my 11,000ish followers on Tumblr, I'd hazard that only about half of them are Goths.) As above, I mention that a babybat is new to the subculture, and that means that they are a part of the subculture, and it would follow that they like Goth things (music, aesthetic, literature, etc.) and are active in the community. Perhaps the solution for you would be not to identify as either Goth or babybat but to just hang around Goths and be a part of the community you seem to like.

As for how you identify, I promise the Goth cabal isn't going to come to you in the middle of the night and demand you call yourself Goth, especially when your interests seem much more varied and inspired by metal and alternative rock. Of course, I think it goes without saying that very few Goths become completely "immersed" in the subculture to the point that they don't like anything that is outside of it. Many of us have at least a soft spot for music outside of the traditional line-up, and if/when the time comes for you to decide that you want to identify as a Goth, you shouldn't feel that all of your interests must fall within the Goth category.

But, I would say, some of them must.

It also follows that without an interest in Goth music, many Goths will dismiss your interest in the subculture. Without a doubt, Goth music plays an important part in the Goth community's history and to ignore that in favor of other aspects of it, such as the fashion or literature, is enough to earn you a big "poseur" stamp from some Goths. Longtime readers will know that I've fallen out of favor with demanding that people do or like certain things in order to be a Goth, but I think it's wise to know that other Goths are fiercly protective of the subculture in that regard.

I hope that helps.

Readers, when did you feel that you "graduated" from being called a babybat into being a Goth?
Email ThisBlogThis!Share to TwitterShare to FacebookShare to Pinterest
Labels: the scene