Ever since I got my tragus pierced I've been really into earrings. Maybe it's because the little black stud looks so lonely there all by himself, maybe because I now know what to look for in jewelry. Anyway, my interests in earrings has been re-kindled and I was happy to receive a few pieces from BodyJewelleryShop.com. 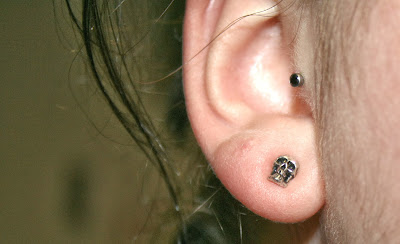 I placed my order for these pieces on October 23rd and received them on November 8th, not bad for an order from the UK. They came in a small padded envelope, nicely organized into little baggies to keep the jewelry from getting lost or separated. Each of the Alchemy Gothic pieces included a little pamphlet on how to care for Alchemy Gothic, which I found to be a nice inclusion. 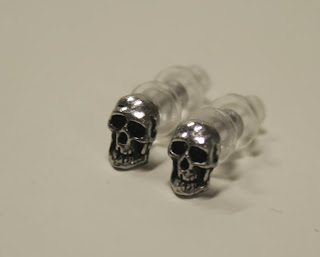 First up were these lovely little Alchemy Gothic skull studs, and when I say little I mean little. I dropped one on the floor at my work and it took me ten minutes to find it! But I'm so glad I did, they're really nice and subtle and you can't really tell what they are unless you're really getting up close to my ear, which I love for a more casual or even corp-goth look. They are made of surgical steel, so even when I wear them for a days they don't itch or pull at all. These earrings are $8.90 for a pair, which I feel is an absolute steal for earrings that I'll be wearing for a long time. If you want to buy your own, they're available on the shop here. ((They also send me two earring backs with the earrings, which is brilliant. I'm forever in need of new earring backs.)) 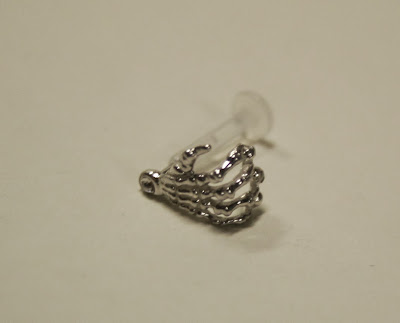 Next I got this wonderful little skeleton hand tragus stud. Unfortunately, my tragus is still healing and I've been advised not to try to swap out the jewelry for another couple months, so I have to hold off on that. This piece doesn't have a straight metal barbell but rather a bioflex stem, which is great if you're allergic to metals. My only gripe with this is that the skeleton hand I received doesn't have the black jewel featured in the picture on the website, it has a little clear one. Not a deal breaker, but a little annoying that it's not exactly as advertised. If you want your own little skeleton hand, it's on the website here for $5.90. I'll be sure to update this page with a picture of it being worn as soon as I can change my jewelry out. 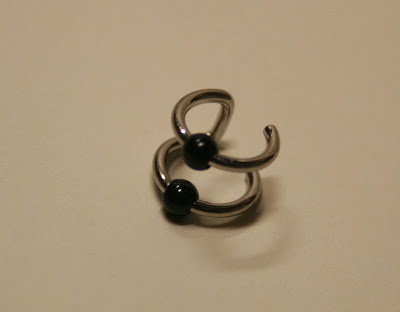 The next piece I ordered was a little steel clip-on cuff with two black balls. I've been considering getting my cartilage pierced for a while, so this was nice to be able to see what one of those piercings would look like without having to go through the piercing itself. I was worried about the clip being too tight or too loose, but it fits nicely on my ear and doesn't budge for the whole day. The website shows it being worn with the balls facing inward, but I've worn them facing both ways and they still look great. I don't think I'd recommend doing anything incredibly active with it on, or sleeping with it, but wearing it around all day for class was just fine. If you're aching for your own little clip, you can find it on the website here for $2.90. 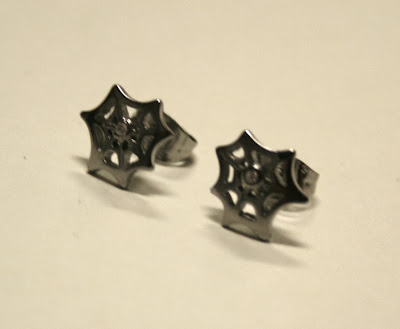 Next are these cute stainless steel spiderweb studs, which are slightly bigger than the skull earrings but still extremely pretty. The little gems inside them remind me of spiders themselves, but without the eight legs. Because they're a lot flatter and the light reflects across the whole surface of the spiderweb at once, they're not exactly subtle so I would recommend these for flashier looks. I've been thinking about wearing more spider themed outfits and these are definitely going to make it into those. They're listed online here for $4.40. 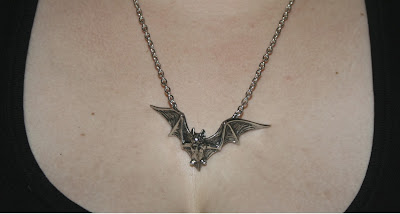 The last thing I got in this package was this Alchemy Gothic bat necklace, which to me was the total must-get of the order. It's a big bat, three-dimensional so that it projects off of the chest. It's definitely a showy piece, but it's my preferred length for necklaces and...it's a bat. Can't have too many bats! If you want to get your hands on one, they're on the website here for $25. 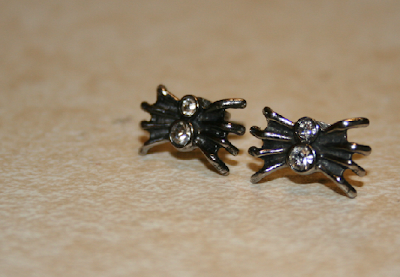 These spider earrings, oddly enough, came to me in an entirely separate package by themselves a few days later. I can't think of why that might be, but I'm not really complaining. I wore them yesterday (along with several other spider-themed items of clothing... it was that kind of day) and got lots of compliments on them. So, I'm pretty psyched, even with their late arrival date.

Have you all made any new purchases recently?

Disclaimer: The items in this review were sent to me specifically for review purposes. However, as per my review policy, all opinions were completely my own. I really am thrilled with these pieces.
Email ThisBlogThis!Share to TwitterShare to FacebookShare to Pinterest
Labels: fashion