Many dark and spooky corners of the internet are buzzing about this, but I couldn't resist posting about it here. Yes, it seems that the beloved cult film Beetlejuice might be getting a sequel directed by Tim Burton himself. Of course, everyone is reacting to this news differently, but I thought I'd throw my two cents in. 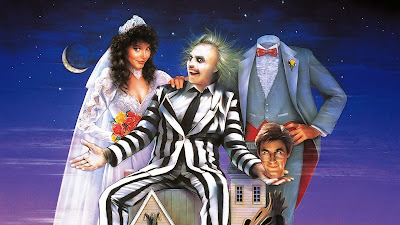 Now, I'll be frank, Beetlejuice is not my favorite movie, and I've never seen the old cartoon (minus ten goth points...) so my opinion is certainly a bit different than die-hard Beetlejuice fans. I liked the atmosphere of the movie, but I can't get behind the weird ham-handed way Lydia's suicidal impulses were handled and how no one talks about how Beetlejuice himself sexually harasses more than one character and is overall just gross.

So, I didn't like the original. Ah well. Maybe the sequel will make up for it.

Though details about the movie are hazy, according to the New York Daily News it appears that the script will be handled by Abraham Lincoln: Vampire Hunter script-writer Seth Grahame-Smith, which is a movie I never saw but have heard constantly described as "an experience." Original Beeltejuice actor Michael Keaton is also expected to reprise the role, according to Rolling Stone, but I can't find a concrete source for that.

But, I'm intrigued. What can the sequel possibly do to further the plot? And why is the sequel being done now rather than, I don't know, in the eighties? Will Tim Burton redeem himself in light of the recent disappointments of Alice in Wonderland and other recent films?

My hope for the movie is that it takes the figure of Beetlejuice, someone with style so iconic that he's more associated with wide black-and-white stripes than anything else, and makes use of him in other situations. He could be funny in the twenty-first century, right? Really, though, my main concern is the over-reliance on green screen technology that dwarfed any attempts at plot and character development in Alice in Wonderland... but who knows?

Now, to diffuse the mood before I start grumbling on the over-reliance of sequels and reboots in mainstream Hollywood, my favorite scene from the original Beetlejuice:

What do you all think about Beetlejuice 2?
Email ThisBlogThis!Share to TwitterShare to FacebookShare to Pinterest
Labels: news