Goths have a number of visual tropes commonly associated with us: bats, coffins, skulls, ravens, and others. While many of these have (essentially) secular origins, it's not uncommon to see Goths sporting religious iconography as well. Ankhs (an Egyptian symbol of eternal life), crosses (crucifixes or otherwise), and Pentacles (a symbol commonly associated with neo-Paganism and modern Wiccan religions) are all commonly seen being worn by Goths. However, some people question the validity of using another religion or culture's symbol without being a practitioner or member of that religion. 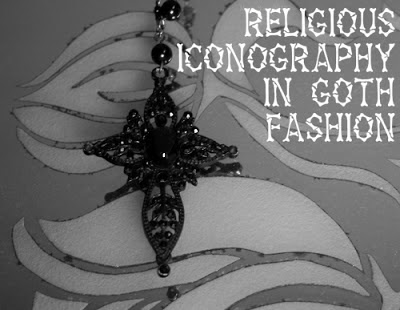 Today's post comes at the request of reader Kallie, and this is what she sent me:


Hi Mary, I was wondering what your thoughts are on Goths wearing religious iconography as fashion. Sure, it's normal to see Goths wearing Ankhs and other Pagan symbols, but what do you think about non-Christian Goths wearing crosses? There are some absolutely gorgeous Gothic-style cross necklaces that I drool over, but I don't feel comfortable wearing a cross, as I am not a Christian. What are your thoughts on this?

My thoughts on the matter can be summed up in the fact that I, an Atheist, wear crosses. I wear them because I find them very beautiful and it's a way to wear my love of western art and history around with me all the time (until I can wear a Gothic cathedral or replenish my wardrobe to take Gothic Architecture inspiration into account), not to mention the fact that they tend to ward off my more conservative religious family members and their questions about my religious passions.

Here are some of the reasons I've heard for people wearing crosses when they're not religious:


It's worth saying that this is not a problem unique to Goths, and that many alternative fashions use crosses. If you have any interest in Gothic Lolita, you'll know that designers like Mana are almost addicted to slapping crosses on anything, and he's not the only one. Hipsters, Nu Goths, Soft Grunges, and many other "urban tribes" wear crosses.

However, I have to wonder (in the midst of so many groups wearing crosses like it's no big deal) why someone would feel uncomfortable wearing crosses. Is it because one worries about offending Christians, or because they feel that they're betraying their own religious beliefs by wearing the iconography of another religion, or because of what the cross represents? All of these reasons, and the inevitable others that haven't occurred to me, will have different ways to solve these problems.

Firstly, I imagine that some people will be concerned about what actual Christians think about the use of their symbol by non-Christians. Now, I'm coming from a country that is overwhelmingly Christian, and Christianity is a central tenant of our laws and media (even in cases when it shouldn't be) and from this perspective I say that Christians aren't oppressed by non-Christians wearing crosses. It doesn't hurt them in any way. And even among Christians that I know, it isn't a big deal because one person wearing a cross doesn't ruin the many advantages they have. So, this shouldn't be so much of an issue.

If someone does begin to harass you as to why you're wearing a cross, here are a few sample responses:

As for worrying about betraying one's own religious beliefs by wearing the iconography of another, I would hope that one's connection with their God and belief is strong enough that it isn't threatened by a necklace, but what do I know? If it helps, Christians didn't invent the cross and it's been used for executions far before Jesus. So it's a bit like wearing a noose on a necklace, except for the religious connotation.

This also goes for worrying about what the cross represents and the messages you are sending to others. Now, you'll never be able to remove the religious connotations of a cross from the minds of most people. However, wearing crosses has recently become a more popular fashion statement among hipsters, even if those crosses are St. Peter's crosses rather than the traditional one, so it's not like people are generally very surprised by fashion crosses. You can view wearing crosses as an ironic, anti-Man statement if it helps as well, which is pretty Punk Rock. You can think about the vampire connotations of a cross, or you can just think of them as a beautiful piece of jewelry. Either way, there are more ways to think about crosses than just as Jesus symbols.

So, that's how I justify wearing crosses despite the fact that I'm not a Christian. Now, other religious symbols come with questions of cultural appropriation, but I think this is a good starting point of a long-term discussion on what responsible decisions we can make with our wardrobe.

Do you guys wear crosses, or other religious jewelry? Do you wear religious iconography when you're not a member of that religion? Why? What responses do you get? What do you say if people ask why you do?
Email ThisBlogThis!Share to TwitterShare to FacebookShare to Pinterest
Labels: fashion