Readers, I must confess, I almost forgot about today's post. Instead, I spent the entire day playing a text adventure. Yes, a text adventure, those finicky adventure games where (inevitably) you get stuck typing "use [object]" on every single stationary object in the game until you make something, anything happen. I find myself infatuated with them. Well, one in particular. The game I found most suited to my tastes was First Times, designed by Hero Robb, and let me tell you guys, it was a treat. 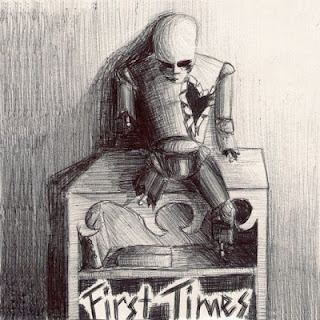 
If you don't know what a text adventure is, let me explain. You know all those fancy visuals and joystick controls most modern games have nowadays? Text adventures take all of those on board and then toss them off the nearest cliff. It's just you and your keyboard versus the game designer's text. Using simplified language (think: examine ____, use ____ on ____, combine _____ and _____, take _____, talk to ____, etc.) you interact with the objects or characters in the game, put them together, use them on other objects, and try to achieve the end of the game. Sometimes there are characters in the games. Sometimes it's just you. They come in many genres (from comedy to horror to fantasy) and difficulty levels (from easy-peasy to "wow, I forgot to pick up that mote of dust in room #3 and now I'm stuck and have to start over.")

The game I'm reviewing for you all now, First Times, is a horror game that's light on the difficulty but complex in the story and overall extremely fantastic.

I'll try not to spoil things for you all, but the gist of the game is that you wake up in a hospital morgue and have to find your way out. Not hard, right? Well, there are locked doors and puzzles to hinder your advance...and let's not forget the creepy wooden doll people. Yes, creepy, human-like dolls make appearances throughout the game and, let me tell you, they're creepy as hell without having to jump out and scream ooga-booga.

My main praise for the game is that Hero Robb is a master of building atmosphere. In the first room there is a message that appears every few seconds, no matter what you're doing. That text?

And, let me tell you, when you're trying to figure out what you have to do and deal with whatever else you have to worry about and your actions keep getting moved up screen by very persistent "clang"s, it builds tension like no other. And that's not all. Sometimes you can be wandering in and out of hallways looking for something, anything, to do to help you advance in the game. And you do this on your own. With Hero Robb's fantastic descriptions and atmosphere building. It's extremely unnerving.

According to the other reviews on the site, the game borrows heavily from Silent Hill. I've never played Silent Hill games and thus have absolutely no idea what is or isn't lifted from those games. I wasn't missing anything by no having played through those games, and people who commented on the game have mentioned that it's not intrusive.

I was greatly immersed in the game, half wanting to close my browser and never be this freaked out again and half needing to finish the story so I can sleep at night, and my curiosity was sated by every description. I found myself caught up in the "plot" of sorts, and eager to find out what happens next. My suggestion to you, reader, is to make a map. In MS Paint or on real paper, just start charting rooms and directions. If you don't, you're going to get overwhelmed by all the North, South, East, and West directions you have to deal with. I found the controls for the game to be intuitive, but because it is a game you have to operate within certain perimeters. So, stuff like this happens: 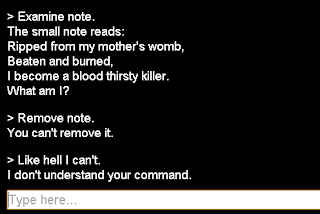 Overall, though, I give this game a 5/5. It is great for horror fans, great if you like Silent Hill, great if you enjoy text adventures, and all around fun to play. If you're interested, the game can be played here on the web, downloaded from here to your computer (unless you have a Mac), or downloaded as an App from the Apple store, Android store, or on Amazon for Kindle fire. All of these options are free.

I will make a disclaimer: There is music composed for the game. I muted my computer while playing so I didn't have to listen to it. However, apparently the music can change very suddenly based on game events. If this would startle you in a bad way, I suggest you mute your computer. My imposed trigger warnings for the game are: needles/syringes, blood, surgery, medical, hospitals, animal abuse, abuse. (You never see images of these items or events. Just text descriptions, but as I mentioned Hero Robb is fantastic at descriptions so use your best judgement.)

So, what do you say, readers?

Open your eyes.
Email ThisBlogThis!Share to TwitterShare to FacebookShare to Pinterest
Labels: misc