If you needed more proof that Punk is dead...

As you may have heard, the Metropolitan Museum of Art's Costume Institute is currently running an exhibit called PUNK: Chaos to Couture. According to the press release on the museum's website, the exhibit "will examine punk’s impact on high fashion from the movement’s birth in the 1970s through its continuing influence today." I'm fairly sure that this is the basic formula for these kinds of exhibits, but apparently no one involved in the exhibit has any sense of irony. Why? It's just depressing. 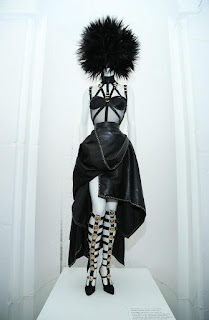 Here's more from the press release: "Focusing on the relationship between the punk concept of "do-it-yourself" and the couture concept of "made-to-measure," the seven galleries will be organized around the materials, techniques, and embellishments associated with the anti-establishment style. Themes will include New York and London, which will tell punk's origin story as a tale of two cities, followed by Clothes for Heroes and four manifestations of the D.I.Y. aesthetic—Hardware, Bricolage, Graffiti and Agitprop, and Destroy. Presented as an immersive multimedia, multisensory experience, the clothes will be animated with period music videos and soundscaping audio techniques."

I'm going to make a running leap into Assumptionville and assume that everyone reading this has a basic understanding of what Punk is. If you don't, let's listen to some Sex Pistols to get in the mood.


What are the central tenants of Punk that we can get from this song? Anger, anti-establishment, messy, powerful, and driven. That is what Punk is, and that is exactly what the Met seemed to mention, but then completely forget when curating the exhibit and the guest list for the Gala.

Besides the fact that the relationship between DIY and Couture is as simple as "they are different except when the latter appropriates the former," the whole exhibit gives me hives. As with everything they can get their grubby little paws on, high fashion grabbed punk by its studded belt and made off with it in the complete wrong direction. By aping Punk looks, Couture is erasing what Punk means. Since Punk is not just a street style, but a political anti-establishment message, they missed the entire point. If the Met's exhibit had any sense of irony about the situation (which I guarantee you it doesn't) it would have been fine because they could have documented how silly it is for the establishment to glorify those who wanted to escape it.

However, the Met doesn't just document this unfortunate homogenizing of a vibrant, passionate movement, but it glorifies it. And then it sticks examples of "high fashion Punk" (well, there's a contradiction if I ever saw one) on mannequins with very silly wigs. They're not even punk, they're just silly. 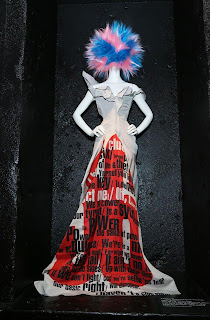 Of course, the exhibit itself has some "actual" punk items on display. I'm interested to know how they got a hold of these items, but it's nice to see them preserved somewhere, even if the entire institution that preserves them is contrary to their purpose. 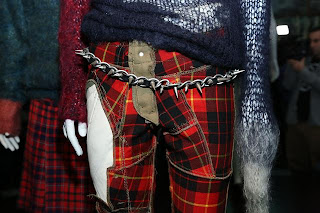 
Part of their exhibit is showing the direct influences on high fashion that Punk has made, and I'll admit that that part is actually pretty interesting. You can see online here some examples of what they think Punk street fashion is and how it relates to high fashion.

>On May 6th, the exhibit was the focus of a star-studded (haha, I'm so clever) Gala Benefit, which enraged even more people than the exhibit itself. The attendees at the Gala were not related to the Punk scene at all. Pop stars and actors and celebrities with no ties to Punk. The honorary chair of the Gala? Beyoncé. You know. So punk.

In keeping with the theme of this rather bitter post, let's look at some of the fashion travesties committed in the name of Punk at the Gala Benefit: 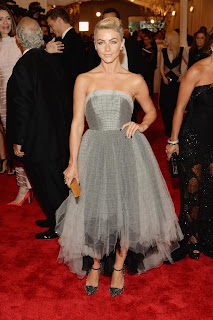 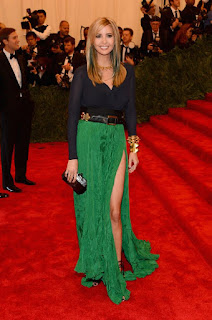 (If you don't think that it's funny that Donald Trump's daughter came to an exhibit on Punk we can't be friends.) 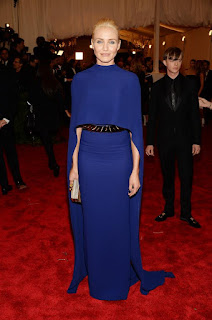 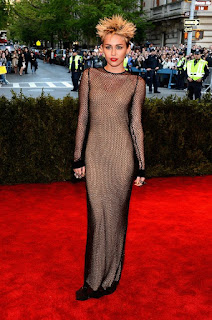 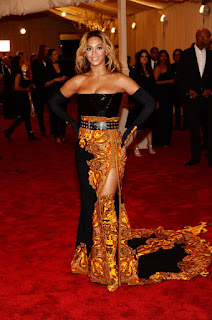 Pop stars in dresses worth thousands of dollars with mindless cliches (fishnet and studs prime among them) tacked on. So Punk.

There were two looks, however, which I thought were passable. The first was by Madonna, who flaunted the red-carpet dress code by wearing a studded jacket with many belts, a dog collar with a padlock on it, fishnets, and shoes that didn't match at all. As far as "high-fashion Punk" (sigh) goes, she did pretty well. Even if she's pretty much the mother of modern pop music. 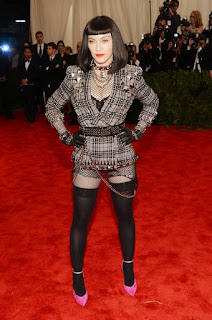 The second is Zandra Rhodes, English fashion designer who went all out in a "frumpy" black dress with red sash, pink...thing, her standard bright pink locks, messy makeup, and safety pins all over. It looked messy, unfashionable, frumpy and thrown together. It doesn't capture Punk's effortless style, but it flaunts convention in a way that no one else did. Rock on, Ms. Rhodes. 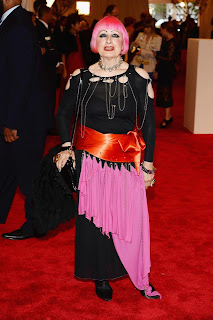 Let us also praise Grace Coddington, former model and creative director of Vogue magazine, for being a goddess: So, in summary, I'm dubious of the exhibit. The lead curator of The Costume Institute, Andrew Bolton, says that Punk "has had an incendiary influence on fashion" and that "Punk's democracy [ahem.] stands in opposition to fashion’s autocracy, designers continue to appropriate punk’s aesthetic vocabulary to capture its youthful rebelliousness and aggressive forcefulness." Well, that's all well and good, Mr. Bolton, but when you unironically support this misunderstanding of what Punk is, then you've got me a little upset.


If you're still interested in seeing the exhibit (and paying the Met's exuberant price tag to do so), it will be running from May 9th to August 14th.

For the rest of us, here's some Siouxsie to put us in a better mood:

What do you think about the exhibit?
Email ThisBlogThis!Share to TwitterShare to FacebookShare to Pinterest
Labels: fashion, the scene