Peter Murphy what did you do now?

Peter Murphy, lead singer of iconic Goth band Bauhaus, was arrested this weekend in LA on charges pertaining to DUI and drug possession. Chances are, if you're a Goth on the web, you've head snatches of this already, but I wanted to bring as many of the details together as possible for an easy but comprehensive guide to what this means. 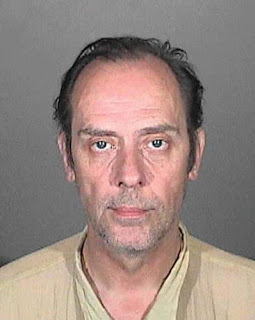 The court accusations are as follows: Peter Murphy was driving intoxicated on Saturday, March 16, and hit a car at about noon in Glendale, California. The driver took down the licence plate number, but apparently was injured enough to necessitate hospital care. A witness to the crash followed him, blocked his car, and called the police. On inspection of the vehicle, methamphetamines were discovered in the car. The three misdemeanor charges are the DUI, hit-and-run driving, and drug posession. Peter Murphy is currently pleading not guilty, but don't expect to see him in court. He is pleading through his lawyer and is probably going to avoid public appearances as much as possible.

Peter Murphy is pleading not-guilty, so it might be interesting to see what the defense has to say about it. Especially the drug charges, because according to the police Peter Murphy was trying to dispose of the drugs in the police car, and anti-police feeling is at a high at the moment so it might not be difficult to imply that the police planted the drug bag. Why? God knows, but it is a possibility for the defense to implicate it.

However, Peter Murphy was also intending to go on his Mr. Moonlight tour, where he would be preforming both modern solo work and older Bauhaus-era songs. The tour is set to kick off in San Antonio on April 22,  and will continue as scheduled since Peter Murphy is on bail. He will not be permitted to drive during that time without court permission, but that shouldn't make a difference to tour.

Of course, many are disappointed by this because we all like to put our favorite musicians on a pedestal and think that they can do no wrong, or, if they do do wrong, in a glamorous way. Driving while intoxicated and injuring someone is not exactly a glamorous premise. It's also not doing much to help the stereotype that Goths are all horribly irresponsible drug addicts, especially when some Goths seem to be more upset that the tours might have been cancelled than justice be carried through. I wouldn't be surprised if some media use this an example of how Goths are the worst thing to ever happen to human beings ever.

So, I'm disappointed in Peter Murphy, as I would be disappointed in anyone else who did that. But I know you all must have an opinion. What was your reaction to this news?
Email ThisBlogThis!Share to TwitterShare to FacebookShare to Pinterest
Labels: misc, the scene