Goth origami, now I've titled posts everything, haven't I? Today, readers, I'm taking a train from my college in Massachusetts to my home in Maryland and I have about eight hours to kill. So what's a girl to do? While I've got my kindle charged up, I do wish I'd had the foresight to pack something else that didn't involve just reading or playing Solitaire. So, today, I'm bringing you a post about one of the fun things I wish I could be doing as I continue down the East Coast: Goth origami. 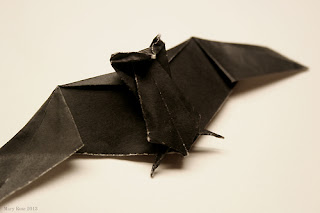 An origami bat folded for me by a friend

Most people recognize origami as being the paper crane kits sold at Michaels all the time (I had one when I was twelve, I admit, and I jealously guarded the metallic purple paper saving it for my One True Project which never came.) It's a perfect craft, in my opinion, because it's relatively cheap, extremely portable, and once you get in the rhythm of it can be done while you do other things. If you have the paper you need for origami, you can look up all kinds of folds online and don't need to purchase books or trace templates. Besides, they make great little gifts, and the types of origami you do can personalize it to no end.

So how do we personalize things around here? There's a surprising amount of stuff you can do to make origami Goth friendly. First would be, I think, to start with the kind of paper you use. While you can technically use any paper you choose, Wikipedia recommends choosing a paper that is the same weight or slightly lighter than copy paper. Wet origami, or origami done with a special paper that is dampened and then folded, is usually slightly heavier, and one of the only origami types that has to be done with a specific kind of paper. So, to make it Gothy, pick a color pallet that speaks to your spooky soul, such as black, silver, grey, white, red, purple, dark green...etc. You can also chose double sided or single sided paper, meaning paper that either has color on both sides or is colored on one side and white on the other, not to mention papers that are metallic or have patterns on them.

If you're having a hard time finding the perfect origami paper in the right colors, you can order reams of paper on amazon or similar websites in a staggering variety of color, texture, and weight. Just make sure to trim the paper into perfect squares before folding to avoid a misshapen disaster.

So, you have your paper. Now what to fold? I took the liberty of finding a few origami tutorials with Goth appropriate motifs, so grab some paper and get folding!

Do you guys do origami? What kinds of things have you folded?
Email ThisBlogThis!Share to TwitterShare to FacebookShare to Pinterest
Labels: misc