A familiar situation for school aged Goths: You're sitting there in class, and the professor is talking about architecture. You're fine through most of it--Byzantine, and Romanesque, and Baroque. That's all fine. But then your professor mentions Gothic architecture and suddenly you're aware that all eyes sidle over to you. I'm sure I'm not the only Goth who has experienced this. Even as most of us patiently (or not so patiently) explain that the Goth subculture isn't related to Gothic architecture (or, like my art history professor, the professor makes a point about Gothic architecture not being "about large amounts of black eyeliner." and everyone stares at you even more) the stigma remains. Even more curiously, many Goths are attracted to Gothic Architecture. Why? They're not related, are they? Today I want to make a case for the reason why Gothic Architecture might be more related to Goths than we think, and why Goths like it at all. 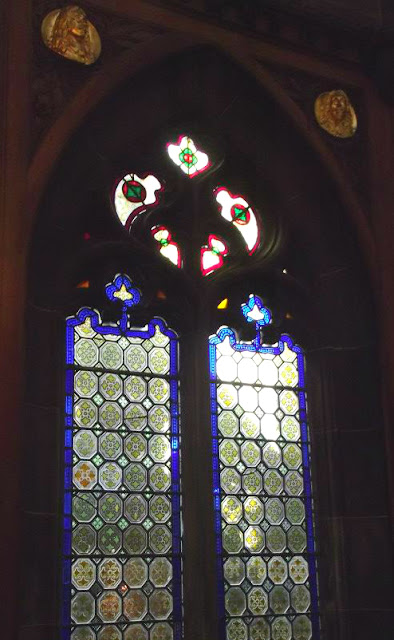 But where would this post be without a little history and explanation? No where, I tell you! Alright then, so let me tell you about homestuck architecture. The architecture of churches and cathedrals all, essentially, had one goal in mind: conveying the power and majesty of God and the Church to the people who went to church. Now, the movements that surround Church architecture all stemmed from a central question: How do we do that? Everyone had different answers. Domes, mosaics, doorway relief sculptures... all of these were used in different combinations over many centuries to drive home the message in Church goers that God is Great and the Church are Cool.

Gothic Architecture began in churches as an off-shot of Romanesque Architecture. The first Gothic Church as we know it is the Basilica of Saint-Denis church in France, consecrated in 1144. Abbot Suger, the abbot in charge of the church's style and inspiration, imagined that "the whole [church] would shine with the wonderful and uninterrupted light of most luminous windows, pervading the interior beauty" (source.) Now windows existed in architecture before, of course, but the amount of light and windows that Abbot Suger wanted required a bit of ingenuity. So, after some tinkering and a few more churches, the Gothic style started to come about. Here are some defining features:

All of these went a long way to answering the question of how to show God's might to the people entering a church. Of course, the Gothic architectural movement wasn't all churches, but they were the defining structure of the era. All together, Gothic architecture looks a little bit like this: 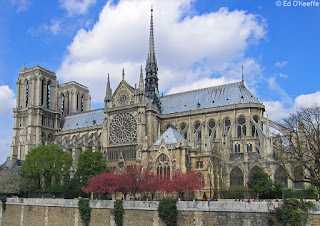 The interior of Notre Dame Cathedral in Chartres: 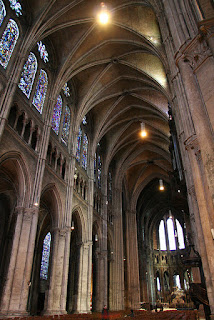 The interior of Notre Dame Cathedral in Laon: 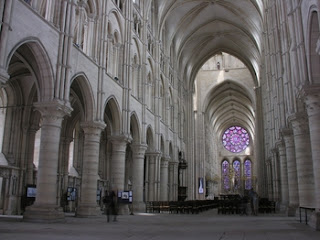 The exterior of Notre Dame Cathedral in Reims: 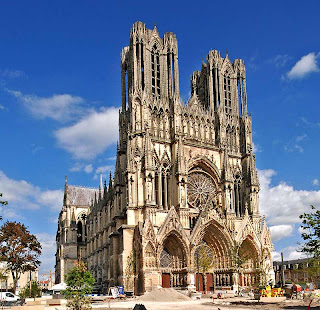 Gothic architecture wasn't very popular in the eras that followed. The very name Gothic was an insult given by Giorgio Vasari, a classically-inclined Italian man in the sixteenth century, because the buildings were "crude" and "barbaric." The thing that must be understood here is that in the renaissance, there was a hearkening back to classical (that is, Greek and Roman) ideas, and a belief that everything that came between the classical era and the contemporary renaissance era was unworthy of discussion. This attitude gave way to many of our modern terms for those ages--the "dark" ages, or the "middle" ages, for example. So he called it Gothic, and the idea that these structures were very out of fashion pervaded the cultural mindset for many years. (It didn't help that the French revolutionaries liked to take their frustrations out on Gothic cathedrals because Gothic architecture had been a favorite of the french royal family for so long.)

So, we've got architecture that the mainstream culture deems dark, crude, barbaric, and weird. Sound familiar? I thought so. A large part of the connection that I perceive between Goths and Gothic Architecture comes from a kind of food chain of influence, and it goes thus: Gothic Architecture influenced Gothic (Romantic) novelists, who wanted to evoke the same sense of darkness and foreboding that the buildings did, and sometimes included the Gothic architecture and settings in their novels. Then, when the twentieth century horror films were looking for inspiration, they look back at the Gothic novels of the Romantics and Victorians. At the same time, more modern horror writers took inspiration from the novels and horror films. Then, when our favorite bands took influence from either the films or the novelists, and incorporated them into the lyrics of their songs. Thus, the influences are preserved.

Don't believe me? Let's do a bit of tracing.


We'll start with a building done in the Gothic style. Or, more specifically, the Gothic revival style of the Victorian era. After the original Palace of Westminster, where the English parliament had met since the Middle ages, burned down in 1834, there was a movement to replace it. Since the Victorians were, in modern terms, "all up in their feels" about Gothic architecture at the time, it was proposed on committee that the building be rebuilt in a Gothic architectural style. The building was completed in 1870, and you will note some of the Gothic elements that I listed previously. Pointed arches, spires, and multi-dimensional facades all make an appearance on this particular Palace. 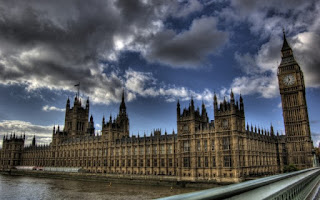 Now, fast forward almost forty years. A middle aged gentleman is working on a novel, part of which is set in London. He's watched the Palace of Westminster go up since he was about thirty years old, and is extremely familiar with the Gothic architecture in London. The clever-clogs among you might know who I speak about already. I submit that Bram Stoker, being a citizen of London and Westminster, was fully aware of the Gothic architecture around him, and incorporated it in designing the tones of his most well known work. Of course, he wasn't the only Gothic author, and may have also been taking inspiration from the Gothic novelists who were equally inspired by Gothic architecture in their home cities. The Monk by Matthew Gregory Lewis comes to mind, as do The Mysteries of Udolpho by Ann Radcliffe, but for now we're going to stick with Mr. Stoker.

Fast forward again, this time about 1931. Bela Lugosi stars as Count Dracula in the black and white horror film Dracula, directed by Tod Browning. I don't know how o justify my claim that this follows on from my last paragraph because it's well known that this is an adaptation of the novel, so let's look at a picture of Bela Lugosi in all his glory. 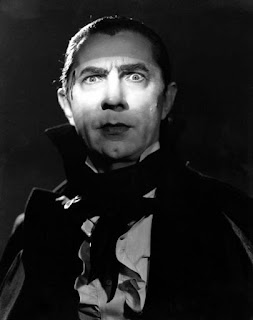 The final leap that I make here is one that should come as no surprise to you all. In 1979 the band Bauhaus recorded "Bela Lugosi's Dead", a song inspired by the actor who played Dracula in the aforementioned 1931 film. Considered by many to be the iconic Goth song, it clocks in at over nine minutes of pure gawth:

Hre is where I end my little diatribe of the "Gothic foodchain" I believe connects us and justifies the almost collective love that Goths seem to have for Gothic architecture. But there are things beyond just mainstream reactions that make us like Gothic Architecture, and it doesn't require as much explanation, don't worry. This post is already too long for that.

On the very basics of what Gothic cathedrals look like, I think there's an aesthetic appeal there that draws some Goths to like Gothic architecture. Gothic structures tend to be weather worn so as to be very dark stone, they look pretty foreboding, and the ornate stonework is reminiscent of spiderwebs or venetian lace. They look elegant in a way that (in my opinion) modern architectural structures don't, and whether some Goths like it or not, Goth style tends to be dark, ornate, antique-inspired, and a little creepy or foreboding.  Not only that, but Gothic architecture is often in a state of disrepair. It's historical, dark, gloomy, and broken. Goths make no secret of the fact that we tend to find beauty in dark places where others might not. So, in my opinion, it makes sense that Goths (as a whole) like Gothic architecture. What do you think?

This post has been brought to you by my switch from being a History and English double major to being an English and Art History double major.
Email ThisBlogThis!Share to TwitterShare to FacebookShare to Pinterest
Labels: the scene