Hi, I'm Mary, I am a fat Goth, and this body-policing and fatphobia in the Goth subculture has got to stop.

For all the claims of acceptance in the Goth subculture, the community isn't perfect. I've already written about Goths having prejudices. Assholes are likely to creep into any subculture, but I think the fact that Goth is usually interpreted as being very open-minded makes it all the more insulting when certain individuals go around policing and insulting other members of the subculture. Usually it's along the lines of Wai u no goffick liek i goffick? but sometimes, oh sometimes, it's much more rude. And today I'm here to talk about Fatphobia in the Goth subculture. 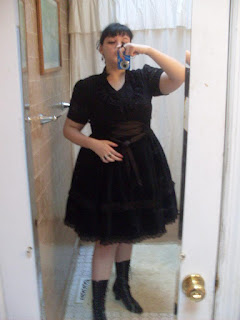 
I sincerely doubt that I need much evidence of this. Chances are, you've seen it. Usually screencaps of 4chan posts making fun of a fat Goth (the image macro which claims that the fat Goth depicted is going to "Cut herself...another piece of cake" comes to mind), but sometimes other people sharing their opinions of any Goth who dares weigh more than X pounds or is above X size. If you want to be repulsed by our own subculture, just google or search Tumblr tags for the phrase "fat Goths" and you can see many people complaining about fat Goths. Some of the most popular complaints being:


The odd thing I've noticed is that many of the people complaining about fat girls participating in the subculture are people who aren't in the subculture but are attracted to the elusive "sexy gawf chick." And, I'm going to be honest with you, it's usually men. Towards women. And when they get into the subculture and find out that we're more than just walking, talking, kinky sex-drones with DD tits and waists you can wrap your hands around and have the finger touch, they get on the offensive. They whine about the fat Goth girls who obviously must be doing it for male attention or because we don't look good in "normal" clothes.

Let me tell you, the only reason I don't look good in "normal" clothes is because the most attractive accessories are self-confidence and a smile, and I'm not wearing either when I'm dressed in skinny jeans and a Hollister t-shirt. Those clothes don't make me happy, so I don't wear them with confidence and happiness. It has nothing to do with being fat.

Now, I'm not about to tell someone that they can't have aesthetic preferences. If you have a thing for pronounced collarbones in your sexual partners, that's fine. Really. But I am telling people that insulting others, or attempting to, based on your sexual desires is not only wrong, it's pathetic. It is reducing someone's worth to how sexy, beautiful, attractive, etc. you personally find them. And how narcissistic is that? My worth, and the worth of other fat people, is not dependent on the sexual or aesthetic preferences of shallow douchebags with narcissistic complexes.

An aside: From within the subculture, it seems to mostly come from individuals who want the subculture to stay within its roots, they want every guy to be the perfect high-cheekboned and gaunt Peter Murphy and every woman to be the willowy and sultry-but-intimidating Siouxsie Sioux. According to these people, none of the original Goths were fat, Goths can't be fat. Or something. But they also seem to be the type of people who most viciously guard the "you must listen to Goth music to be a Goth, it's nothing to do with fashion" trope, which seems more than a little hypocritical. I wasn't aware that I had fat deposits in my ears that specifically prevented me from listening to Sisters of Mercy, but what do I know?

And, yes, I do say the word fat, unless asked not to by someone who I might be describing. It isn't a dirty word. Promise. The thing is, many of the conventionally attractive aspects of women are those which are made possible by deposits of fat. Breasts are mostly fatty tissue, and so are our asses. Strategic placement of body fat, in the chest and on the hips, makes up the traditional "Barbie" hourglass. Everyone has fat on their bodies, it's absolutely necessary to our survival. It's used as insulation and energy sources, but yet if it's not in the "acceptable" areas of our bodies (or is in those areas but "excessively" or more than the body-police deem attractive), it must be disgusting. Or if you have too little, of course. And if you have just the right amount, you're probably criticized as being fake and a slut (more concepts they seem to think are insults.) So there is no winning, even if you do have the "ideal" body.

And, because I never get tired of saying this, let's dispel that one big rumor, shall we?


Being fat does not make someone unhealthy.

If you've ever looked at the 2012 Olypmian lineups, you'll see that there are people of all body-types there. There's even an index on the BBC to show you whose body you most closely resemble (I apparently very closely resemble Anita Marton, a Hungarian woman competing in women's shot put.) Think about it, these are Olympians. They're some of the strongest, most passionate, and most talented athletes in existence. And, yes, some of them are fat.

I find it laughable that some people find "fat" to be the biggest insult to give someone. It certainly doesn't work on me, I got over hating my body and trying to be someone I'm not a long time ago. Someone telling me "You're fat" holds about the same weight as someone telling me "You have blue eyes" or, from people further outside the subculture, "You're such a Goth."

So why get upset about it, then? Because I know I'm lucky to be as self-confident as I am. I've gotten over my own body demons, smacking them down with the twin war hammers of I Don't Give a Fuck What You Think and I Am More Than Some Anonymous Poster On The Internet's Fap Fantasy. But I know there are other people who have bigger demons than mine, or who don't have the support than I am lucky enough to have, and who don't have the self confidence yet to just brush off those insults. And that's why I'm getting angry. Because not everyone has a thick skull and a give-'em-sexy-hell attitude, and the people that are still working their way there don't need the absolutely vile amount of criticism.

This whole fatphobia thing is also evidence of something that at seems quite obvious, but nonetheless is difficult to keep in mind at all times. It's evidence that Goths are pretty regular people and very influenced by the culture trends and media of our day. It's easy to think that the relationship between Goths and media is very Us against Them, but it's really not. We're bombarded with media messages just like other people, and so our ideas and opinions are motivated by vast cultural trends, even when we profess that we find certain "alternative" aesthetic qualities attractive. So, we absorb some of the prejudices, including against body fat, that the media is currently assailing us with.

But, it's not at bad. Some independent Goth clothing brands have begun expanding their sizes and taking custom orders to allow for size differences. Jillian Venters of Gothic Charm School has had multiple posts which outline some of the best ways to accumulate a plus-sized Goth wardrobe. There are plenty of plus-sized rolemodels abound for Goths (even branching out of the Victorian, Romantigoth, and Medieval styles that are so commonly associated with larger Goths), and many of our peers are supportive. It's just the few who are being truly discriminatory and rude to fat individuals, but unfortunately the few who do tend to speak loudly, and anyone who has had self esteem issues can tell you that one bad experience can ruin months of can-do, body-positive attitude.

I know that this article seems to have been mostly tailored towards fatphobia against women, but that also seems to be the brunt of the fatphobia that I've encountered both personally and in my research. That does not excuse Fatphobia against Goth men or other genders, and if you would like to contribute to the discussion from those perspective please do feel free to contact me via the usual methods about it and I'll add it to this post or make another which includes your testimony.

I'm not big on some of the popular fat-positive slogans-- I'm not "more to love" or "chunky and funky", I'm a Goth who happens to be fat. That doesn't make me any worse, or any better, than Goths who happen to be skinny, or "average", or any other body type. As hippie as it sounds, we're all beautiful and attractive and no body is better than any other body. I'm Mary, I'm a fat Goth, and I'm as worthy of respect on my own merits as anyone else. There is no room for fatphobia, or any other prejudice, in the Goth subculture. So please, the next time you see it, point that shit out. The only way any prejudice in the subculture is going to be erased is if Goths make the effort to stamp it out.
Email ThisBlogThis!Share to TwitterShare to FacebookShare to Pinterest
Labels: the scene