About a week ago I recieved a message from self-proclaimed Babybat Craig, who was wondering how one goes about evolving from a Babybat into a Goth. After all, coming into the subculture in the beginning can be a little like diving into the deep end of a very dark poor filled with snarky eldergoths grumbling about the good old days and defensive gate keepers handing out decrees of "NAWT GAWFICK." So, I hope to hoist a little blacklight lantern in the dark and provide a more comprehensive guide for babybats who are unsure of how to proceed and claim the label of Goth as their own. 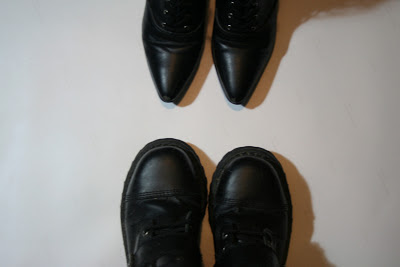 First, we ought to separate what makes someone a babybat and what makes someone a "full-fledged" Goth (and even what separates Babybats from people with Goth interests.) A babybat is someone, for our intents and purposes, who is new to the subculture. They might have discovered it a while ago, but they're just starting to really delve into it and express interest in claiming the subculture of their own. This is what separates them from people with Goth interests: They have a desire to be aligned with the subculture. Someone who really likes The Cure or wearing somber colors or Tim Burton movies but who doesn't want to be a Goth isn't a babybat. From the babybats that I've talked to, here are the types that I've come across:


I don't pretend to cover everyone with this, there are certainly people who have other reasons and maybe some who have some sort of crossover of the four, but these are the ones I've mostly found. Throughout the rest of this article I'll do a bit of dissecting of these people's reasons and then offer a bit of guidance.

However, before I begin, I want to talk about Labels. Labels are a thing that we need to get over despising. They are a kind of social shorthand used to differentiate groups and create mental organization of people that we may or may not want  to associate ourselves with. Like using the tagging system on Tumblr, or putting a label on a file, or referring to a chartreuse crayon as "Green" for ease of memory, it's not trying to erase anyone's special snowflake identity.

Got that off my chest.

Let's start with reason number one, shall we? Let's talk about the babybat who is interested in Goth but just doesn't know where to begin. This is, possibly, one of the easiest to remedy. The first thing you want to do is identify just a few things that really drew you to the subculture. For me, it was horror literature, pretty Victorian clothes, Tim Burton, and a few of the popular Goth bands (particularly The Cure and Bauhaus.) Just because yours don't fit some of the aforementioned gatekeeper's ideas of what a Goth is doesn't mean that they can't spark an interest in the subculture. For you, it might be cemeteries, dramatic eyeliner, Victoriana, EBM music, black dog collars, Magic: The Gathering vampire decks, or black and white stripy tights.

Whatever it is, start looking for related content in the subculture based on just one of those at a time. If you were drawn to it through punk music, go chronologically and look into some early post punk music and then later stuff. If you came in via a love of classic horror flicks, check out some well-loved Goth movies like Bram Stoker's Dracula and then work your way into Goth-loved movies. If you fell in love with the clothes, do a bit of exploration in all of the styles. If you need a list, check out this link of the different "types" of Goths and then google more images of those styles. You probably have a lot of resources at your disposal for this, from libraries to Youtube to Wikipedia. Then, as you meet more enthusiasts you'll see their interests, and you can go from there. If you ever get, for lack of a better word, stuck again and unsure of where to proceed, try out another interest of yours. You'll become familiar with the subculture in no time.

Or, another option, is to join a blogging or social networking community that is frequented by Goths and just dive right in. I recommend Tumblr, personally, but Blogger is great and there are some nice forums out there that are more specific to your interests. As you converse with other people, read their bios or blogs, and look at some of the older posts, you're sure to be bombarded with new things for you to check out and an overwhelming amount of interesting stuff. Don't be afraid to be new. We were all new once, and most people won't bite your head off for it.

Secondly, there are some people who are under the impression that there is a checklist of things you need to like to be in the Goth subculture or you have to meet someone's minimum requirement to be in Goth. That's all a load of nonsense, if you ask me. Sure, liking one Joy Division song without any other interest in the subculture probably does not a Goth make, but accepting the label of Goth is a personal thing and you shouldn't measure yourself up to others (or allow them to do it) so that you can get the Goth label. There are plenty of aspects to the Goth subculture I'm not a huge fan of or that just don't interest me, but don't let those get in your way. And, yes, you can retain other non-Goth interests as well, they don't make you any less of a Goth. You're reading the blog of the girl who's preferred music for baking is old Canadian folk artists like James Keelaghan and Stan Rogers. And I sing along. Loudly. And that doesn't make me any less of a Goth. Just enjoy what you like under the Gothic umbrella and try not to be too bothered with other people who are going to gripe no matter what you do.

Thirdly, we have a babybat who is interested in Goth but doesn't want to call themselves Goth until they pass the Goth Cabal Test and get proclaimed one. This ties into the above comment I made in that you really should not allow other people to pass judgments on your Gothness. Really, there's even in-fighting among the Eldergoths who were there when the scene started about who is a real Goth and what Goth really is, so there's no authority of that kind (and the Goth Cabal doesn't actually exist, sorry.) When you feel that you match up with your own idea of what a Goth is, shaped hopefully by other Goths so that it's not entirely off the wall and wrought with unfortunate stereotypes, you're the only one who can label you reasonably.

Then, we're left with the ever-ominous category of "other." This can encompass a lot of things, some of them being things like bad experiences with people in the subculture or being unsure that your "coming out" as a Goth will have a positive reaction (or indeed being sure that it will not) or a natural resistance to having a label or having gone for so long denying that you were a Goth to others who tried to give you the label that you are reluctant to try and assume it now. One of my main reasons was because I'm one of those people who goes through "phases" of really really liking things (be it websites, clothing styles, music tastes, hobbies, whatever) and I was worried that Goth would be one of those. I didn't want to go into it at full force and slink out later after the phase had ended, especially since Goths already have to deal with the general public calling their subculture a phase. However, most of these can be solved by answering one simple question: are you going to let these things keep you from something that would make you happy? I recommend you don't, but you know your situation better than anyone else. (My "phase" is now five years old and doesn't seem to be stopping anytime soon.)

So, Craig, I hope this answers your question about the evolution of babybats into "full-fledged" Goths and I hope everyone else has found this article informative and interesting. Please feel free to keep e-mailing me at theeverydaygoth@yahoo.com or commenting below so that I can answer your questions and keep writing interesting, relevant pieces. Here's to another year!
Email ThisBlogThis!Share to TwitterShare to FacebookShare to Pinterest
Labels: the scene