I haven't written a review post in a while, have I? I've been trying to keep away from them for a while now, but based on my own amazing experience this past weekend and on the rising percentage of UK readers that I seem to have, I felt it appropriate to make an exception. This week I'll be talking to you about Blackhart Entertainment's Double Dead Tour in Edinburgh, Scotland. 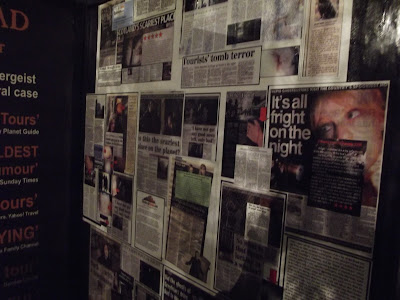 Outside the meet-up spot there was a sign covered in some of the documentation of the Mackenzie Poltergeist. Just some.

Blackhart Entertainment is a tour company founded in 1999 which makes tours based on the works of J.A. Henderson, award winning historical novelist. They host many tours, from the Double Dead Tour that I went on to the Underground City of the Dead tour, the City of the Dead Haunted Graveyard, The Secret of Gilmerton Cove tour, the Burke and Hare Murder Tour, and Twisted Tales of St. Andrews Tour. They vary in length, times, and subject matter, but the entire company has rave reviews. Scarecon awarded the company their Britain's Best Ghost Tour award, they were shortlisted for Screamie Awards 2011, they made the top of Yahoo!Travel's Uk's Best Ghost Tours list, and topped Virgin Media's Best UK Ghost Tours list.That's an impressive pedigree, but even more impressive is that it was so well deserved.

The Double Dead tour that my companion selected for us goes to two locales. Firstly, it goes to the Underground Southbridge vaults, then it goes to Greyfriars graveyard and into the Covenantor's prison there. The Underground Southbridge vaults was interesting because, if you're aware of a little bit about the city, you'll know that Edinburgh was built on seven hills. The hills had to be connected, so there were birgdes and then underground vaults for basically storing people. Yeah. Creepy as fuck. The South Bridge is supposed to be cursed and haunted and all sorts of other things. If you don't know much about the city, though, your tour guide will tell you and explain it much better than I could. The vaults themselves were creepy because standing in there, packed against other people on the tour, you really get a sense of how crowded they could get. Luckily, though, we were all washed. I'm very claustrophobic myself, but I had my friend's hand in mine and could squeeze it if I got too nervous. The only bits that were really bad were when the tour guide decided to spook me and make me scream (which I did, loudly) and when we were asked to turn off our flashlights in one of the smaller vaults and stand in silence as the tourguide told us a story. I could feel other people against me, I could hear their breath, the un-ending dark pressed in on my eyes. I escaped without being harassed by spirits and without having a panic attack, but yeah. It got to me.

That done, we were ushered from the Underground Vaults up to the Graveyard by another tour guide with a pentagram-encrusted umbrella, where even more fun began. The tour went into the Graveyard and we got a brief history of it. While Greyfriars is a very small place, it i home to thousands of corpses buried under the ground, most of them unmarked. If you want to go there, it's open to the public. Except for one part. The Covenantor's Prison, which has a padlock on the gate to keep you out. Well, if you're not on a tour, anyway. Our guide unlocked the gate and we went inside.

Basically, for the unaware, the Covenantor's prison was a kind of concentration camp for the very poor. No one made it out alive, so it's filled with spirits, surprise surprise. The most haunted area is the Black Mausoleum, where the Mackenzie Poltergeist is said to reside. Of course, we went inside. Nobody in our group vomited or fainted or got injured to my knowledge, but hearing about the history of the place was fascinating and terrifying.

After leaving the Black Mausoleum, the tour guide told us the story of Greyfriar's Bobby, which you may or may not be familiar with. He also disclaimed it, leaving the night on a fairly light note. Then, the tour guide bid us goodnight and left about six of us who wanted to see the Harry Potter stones with the ushering-tour guide who walked us between the two attractions. He was knowledgeable too, and very nice in answering our questions as we paused at the Snape, Potter, Moody, and other stones with Harry Potter names. As I was looking at the one for MacGonagle, I felt something on my shoulder and turned to see a face. I shrieked and jumped to see the first tour guide, sans leather coat, with his chin on my shoulder. Creepy bastard. He finished the tour of the Harry Potter graves, told me I had a lovely scream, then bid us goodnight for real at a little past midnight.

Overall, if you can't tell, I had an amazing time. I love creepy history, and honestly if I were living in Edinburgh I'd go on every single tour they offer and then make being a tour guide there my ultimate career goal. It was fun and spooky, and certainly would have induced nightmares if I hadn't slept like a log that night from exhaustion. The tour guide was wonderful and intelligent, fun to talk to, and the attractions were creepy. Luckily I escaped unscathed, and with a sort-of crush on the tour guide. I know he's not the only tour guide for the company, so let me say a bit about the guides. Many of the comments on the Facebook page for the tours make reference to how great the guides were, and I can assure you that they absolutely make the experience. According to my guide, he was a Shakespearean actor and then opera singer, which made him good at improvising stories and maintaining a creepy atmosphere the whole night. I believe him. He never faulted in his stories, and it could have been all lies for all I know, but it was amazing. He was also very friendly and linked arms with me to skip off into the graveyard ahead of the entire group as we were chatting. So yeah. Make friends with your tour guide. They're cool people. Since he made it his mission to terrifying the living hell out of me, he said he wanted me to have a picture that accurately represented my night. I think he got it spot on. 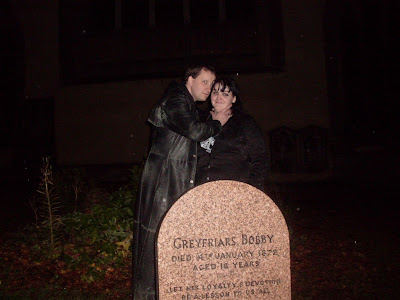 I have a couple boring but necessary disclaimer points about the tours: The underground city and vaults are not wheelchair accessible. Tours are probably not suited for people with extreme claustrophobia, fear of the dark, or fear of the paranormal. The guides will walk very, very quickly from one location to the other, so wear grippy shoes (the cobblestones in Edinburgh are very slippery when wet--which is all the time.) One of the spirits in the underground vault, named "the imp" has been known to steal things, so keep your bag on you at all times. The spirit in the Covenantor's Prison, the Mackenzie Poltergeist, is a well-documented violent spirit. People (and especially women) may come out of the tour with bite marks, bruises, cuts, burns, or other unexplained injuries. Enter at your own risk.

If you're still tempted, you can purchase tickets on the company's website here or on their contact page here. If Edinburgh is too far away or the tours don't seem like your thing, look into the books that inspired them by visiting this link. On the other hand, if you're interested in what else I've been up to on my trip, again I urge you to look at my Study Abroad blog on Students Gone Global. Happy haunting!
Email ThisBlogThis!Share to TwitterShare to FacebookShare to Pinterest
Labels: misc