Despite being currently located in a nation of primarily tea-drinkers, I can't say I've drunk that much tea while I'm here, and certainly less than I did at home. I tend to be out and about more often than not, so a cup of tea in the morning as I'm trying to wake up is pretty much it. However, puzzling over this has got me started on thinking about tea and the various paraphernalia of it, and I was reminded of a specific topic I'd mentioned on my Tumblr some time back: tea journals! 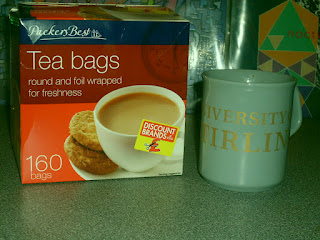 Boring little school mug and tea from Tesco. With 160 bags I honestly doubt I'll need to buy another box before my time here ends!

If you're familiar with wine-snobs (ahem, connoisseurs) you might be familiar with the concept of a wine-journal. Essentially, if you drink enough wine, you might forget which ones you like, which ones pair favorably with which foods, and so on. The solution to this is to have a book wholly devoted to your wines, in which you can record what you think of different types of wine. Some people make them themselves, but they are relatively easy to buy. Barnes and Nobles has one, for example, here. Now, wine snobs have them, but what about tea drinkers? Why less common?

I'm not entirely sure, but that doesn't mean that it wouldn't make a fun DIY adventure! Here is my mock-up on how I would make such a journal: 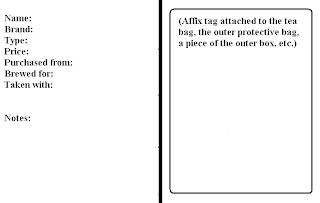 As you can see, it has a place for the name, price, location of purchase, flavor, type of tea, brewing time, how you took it, and other notes on taste and such. Then, at the right side, it has a place for you to affix some sort of visual aid, such as the tag from the end of the tea bag, the outer tea bag itself (NOT the tea bag that actually holds the tea leaves, please, that will just make a mess) or even the face of the tea box. Filled out, it looks like this: 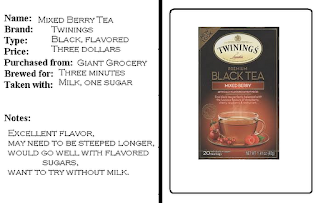 There are plenty of websites you can use to make a small book like this, or you could make it by hand if you're particularly crafty. I think I might invest in one in the future, because I can often find myself trying to remember if I liked a particular tea or not. On my Tumblr it was suggested that such a concept could be turned into a blog, if you're more inclined to do so, but I feel that this has a certain charm to it that would be lost on the internet...that's probably just me, though.

So, readers, what do you think of a tea journal? Do you have one? Have you seen them out there? Or are they rather frivolous and silly?
Email ThisBlogThis!Share to TwitterShare to FacebookShare to Pinterest