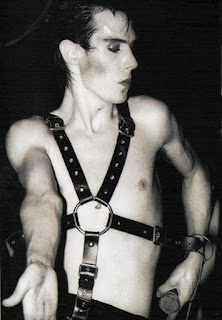 Let's look at some of the recurring Fetish fashion trends, shall we? Collars, boots, high heels, latex/rubber, leather, fishnets, corsetry, military motifs and imagery, and a predominately black/red pallet. Sound familiar? Many Goths have adopted a look which may feature some of these elements, but if you ask a Goth why they wear a collar, they're more likely to answer with "I like how it looks" than "I wear it for my Dom/Domme." Many of the icons of Goth, such as Peter Murphy, were spotted on stage wearing heavily fetish influenced garments. Above you can see an image of Mr. Murphy wearing a leather harness with an O-ring, typical of Bondage wear (you can hook any number of devices to the O-ring.)

If the things we wear weren't enough to solidify the bond, there's certainly music that supports the link between BDSM and Goth. Depeche Mode has a song entitled "In Chains" which, as you might have guessed, features bondage imagery such as the lines "I know my hands will never be free, I know what it's like to be in chains." London After Midnight has an entire song called "The Bondage Song" whose lyrics include such kinky imagery as: "I want the kill, the conquest,/ to be your master,/ wrap your arms around my pale skin,/it's too late to back out you're in,/on your knees and praise your new lord,/deeper now, and here's your reward." If you're a Goth who also partakes in industrial, metal, or other types of music, you'll be sure to see bondage imagery sprinkled throughout the lyrics.