As previously stated, summer has hit my area with a vengeance. While summer is great for people who want tans and for "outdorsey" types, it's the bane of us Autumn/Winter children with black wardrobes. Still, reading "summer guides" to Goth informs me that I can change my black leather for thin black cotton and swap my thick opaque tights for fishnets but there's less of an explanation for what to do with hip-length thick hair. "Wear it up" seems to be the general advice. Perhaps I'm not creative but "wear it up" always feels dull since all I can come up with is a tight bun at varying levels on my head. However, in looking for inspiration for long hair styles, I came to the realization that there was, in fact, a solution: historical hair! 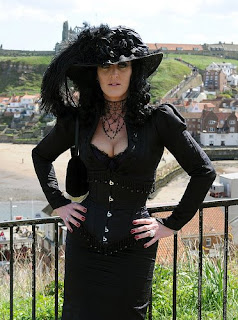 It cannot be said that short hair was particularly fashionable for much of history. In some times, a woman's long hair was her crowning glory and chopping it short was a mark of particularly deep shame. Thus, the longer it was, the better off you were. Still, you'll notice that in many of these cultures, a woman's long hair was kept up most of the time in various styles. Loose hair could indicate a loose woman, for example, or someone who just didn't particularly care about her social status. Thus, historical hair provides the answer to my prayers: up-do's for wannabe-Rapunzels like myself. 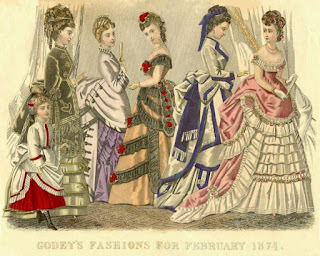 Source: Fashion-Era
(Click this link for a larger picture)

If you can tear your eyes off of the fancy dresses (I don't blame you for staring, I want them all, in black of course!) you'll notice that most of the women's hairstyles in this picture are made up of curls piled and pinned on top of the women's heads and then adorned with various decorations. Victorian women who could afford to dress in this way were encouraged to have long hair, perhaps around the mid-back or longer, but the addition of curls and their placement makes the hair seem much shorter. This way, the hair adds height and is off of the back of the women's necks. Unfortunately, this hairstyle also takes a long time to put on and might require hairspray, which is impractical for some. 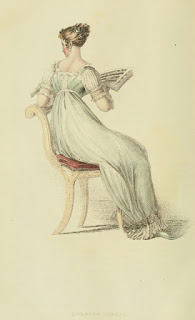 Source: EKDuncan
(Click this link for a larger picture)

Perhaps you are more Elizabeth Bennett than Jane Eyre in your fashion sense. If that's the case, you might want to look earlier. The Regency hairstyle was a revival of some of the Roman hairstyles (more on them later) which were given more glamour to match the fashions of the time. Actually, the hairstyles might be my favorite part of Regency fashion (I'm certainly not a fan of the empire waists of the time, unfortunately.) To achieve you can have shorter hair (still usually around shoulder-length, however) and give yourself ringlets with dishrag curls or a curling iron. Most of those curls should then be swept up so that they lie close to the head with some dangling free of the small bun you have going. On either sides of your face, there should be small ringlets and you should definitely be free to stick as many delicate shiny things in your hair as you can. 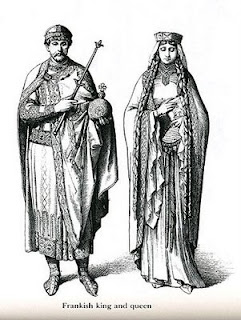 This one might be the most basic style that I'll cover here, but the basics need to be covered. Two long braids is a hairstyle I generally reserve to bedtime when I really don't want to be bothered with untangling my hair in the morning, so it's nice to see it used as an actual fashion statement. The bonus of Medieval braids is that the braids themselves don't have to be limited to the three-strand cross-over method that's popular now. In fashion plates from the era they often seem to be more like coils than anything else, so you can have fun with the different kinds of braids available. Also, braids in the era were often highly decorated with strips of brightly colored ribbon. Goths taking inspiration from this style might be tempted to use Halloween-patterned ribbon which could definitely be a casual-cute interpretation. 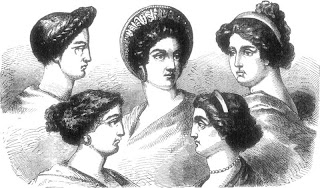 Roman women seemed to fully embrace up-do's as a part of their usual look, which makes sense when you think about where their culture sprang up. Leave the men to build the roads, we're building hairstyles to last thousands of years! Anyway, the typical Roman woman's hair seems to be a combination of thick braids and wavy bits. In the above image, I personally find the top right face to be the most useful to the modern day. A simple headband crowns off what appears to be a wavy ponytail (one that is pinned to the base of the neck where it ends) which can be easily done in modern times. However, the very ambitious can attempt the crown braid (top left) or a crown of sorts, if you're feeling particularly sassy and stylish. If you find trouble with achieving the "height" of the hairstyles pictured, don't worry, the Romans did too! It is reported that they used padding or "rats" to support their higher hairstyles. If you want a tutorial for a hair rat, look no further than Quaintrelle Life!

I realize while writing this that my entries are incredibly Euro-centic. However, I worry that suggesting some hairstyles might be condoning cultural appropriation if they are not yours to wear. So, I welcome you to look into your own cultural past. Beautiful hairstyles can be found in fashion illustrations from feudal japan to pre-European contact Africa to any other place in time and I encourage you to look at them. Another great thing about looking into your cultural past for hair inspiration is the fact that you can find hairstyles which were meant to be worn with a hair texture/thickness which matches yours. For example, if I decided that I wanted to wear my hair up, I'd have an easier time with hairstyles from western Europe than I would from Asia because my hair type was inherited from Western Europeans.

Have you ever attempted a historical hairstyle for a reason other than reenactment or costuming? What was it? How did it work out?
Email ThisBlogThis!Share to TwitterShare to FacebookShare to Pinterest
Labels: fashion