Poll: Graduating from Babybat to Goth

Chances are, if you're a Goth in your teens, older Goths are going to refer to you (sometimes affectionately, sometimes not) as "Babybat." Still, people shed the label at some point, don't they? I don't see many people telling Goths in their mid-twenties "Babybat." So, at what age do you shed the label? 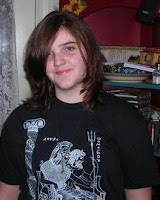 Some will say that you cannot be a teenage Goth, only a teenage Babybat. Since Goth has much of its roots in the club scenes of the UK, teenagers cannot fully appreciate the scene until they are of club going age. Or, it's because we teenagers are forever ignorant in the eyes of the midtwenties elite (not that I think that you all are snobby, but oh boy have I been faced with this attitude sometimes.) Teenagers are supposed to only like Marilyn Manson and hang out only at malls, which is certainly Not Goth At All to these people. Still, less crudely, some people think that teenagers are Babybats because we're still fumbling and, maybe, it's a bit cute to watch.

However, some say that age isn't everything. It's how much time you have spend in the Goth subculture. This way, if I'm seventeen and have been interested and involved in the music, fashion, and subculture of Goth since I was eleven, I am less of a Babybat than someone in their twenties who has only been interested for one or two years. This method of defining allows for people who have some sort of connection in the subculture to shed the Babybat label sooner than those who have only just stumbled on it. However, this method of deciding doesn't take into account the amount you've learned in your time in the subculture. After all, just because you've been "a Goth" for ten years doesn't mean that you've bothered to look up the history and know that Nightwish isn't Goth.

The last, I suppose, way that people seem differentiate between Babybats and Goths is your tastes. Preferring Siouxsie to Manson, plain trousers or skirts to Tripp pants, Poe to Meyers, etc. seems to be the marker. This is the method that I, personally, subscribe to. After all, if you have internet access and are willing to do a bit of research, anyone from any age group can explore the subculture and discover its roots, no matter what age you are or your experience. Sure, there's sure to be a bit of fumbling at first, falling for cheap crushed velvet or calling Tom Waits goth or miles of black eyeliner swirls, but that can happen at any age group. To me, it's not how old you are or your experience, it's your tastes which will tell the world if you're a Babybat or not.

So, what do you think? When do you stop being everyone's beloved Babybat and start being a respectable Goth?

Email ThisBlogThis!Share to TwitterShare to FacebookShare to Pinterest
Labels: the scene