I'll choke down my sobs for long enough to write this post. After that, no promises. I've been holding off on this post for a while, actually. It's subject has been completed for months. If you remember my post about WackyButtons, you'll know that I needed buttons for a project. A lot of buttons. In this post I thought I'd show you guys why buttons were so damn important to me. And hey! It has to do with Goth, sort of! This is my lineage vest for my Literary Arts class, the last day of which was today (hence the sobbing.) The Lineage project is a rite of passage in the program, all seniors make one. The Lineage is a visual representation of your growth as a person and a writer. Others have done doll houses, decoupaged cardboard forts, a tardis filled with books, decorated trees, and a number of other things. I thought for a long time about what I wanted to do for my project until, eventually, I decided that the easiest thing to do would be to go back to my roots. 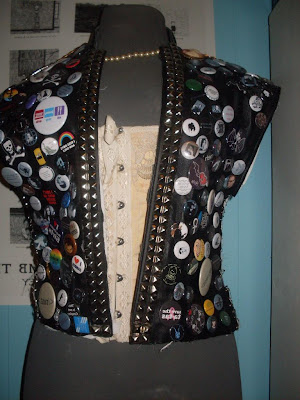 Well, not my Scottish/Irish/English/French/German/Polish mutt roots. I took on my Goth roots and decided to go with a decorated vest, a la the DIY punk and deathrock jackets that have long been symbols of personal taste. After looking through the archives of the FuckYeah! Punk Jackets Tumblr, I had enough inspiration for my vest. The leather of the jacket used to be a knee-length, far too big coat that my older brother had and decided to donate to my cause. After ripping out the lining, cutting it to sit midway between my waist and hips, and ripping off the sleeves and zipper, it was starting to look like a vest. 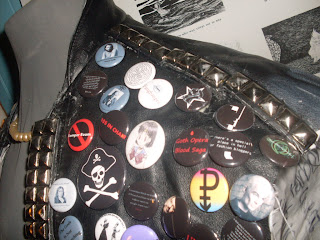 The inside of the vest is lined in the remnants of an old sheet which I painted with a glue and water mixture to make it easier to write on. Of course, it means that it isn't as comfortable, but short of lining the jacket with actual paper I struggled to find something that works half as well. On it, I've written words that I love the sound of, including "Milieu" and "Cyanide." The first assignment I ever got in Literary Arts was to write a list of my favorite words based just on how they sound, so I figured that this would be a good way to tie in the beginning of the class. 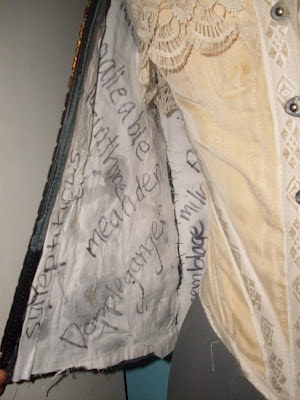 I decided to use studs on the shoulders and the front edges where the zipper used to be to lend to it being more punk-inspired, and the sides are "stitched" together with safety pins. On the back of the jacket is embroidered the phrase "Lector, si monumentum requiris, circumspice." which, if you're familiar with architecture, is an inscription on the floor of Saint Paul's cathedral about the architect, Sir Christopher Wren. It is translated to mean "Reader, if you seek his monument, look around you." After I went there, my love for the architecture has increased tenfold. I want my legacy to be what I leave around me, the world I have changed. 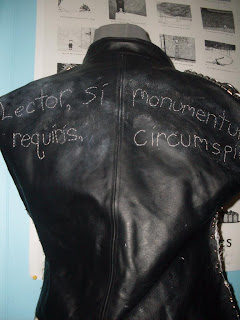 The buttons themselves are from all over the place: Etsy, Wackybuttons, gifts from friends, markets in Camden. Each of them has some sort of significance, whether they be the faces of my favorite musicians or quotes from my favorite Literary works or my favorite pieces of art.I chose buttons for the same reason that I chose to "stitch" up the sides with safety pins: they can be changed. In my life, I try to maintain a kind of homeostasis and this has often backfired terribly. I need to learn to accept change and realize that nothing is as permanent as I would like it to be. It's all significant to me. 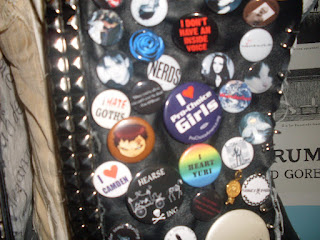 Have you all ever created a piece of clothing that has meant something to you? What was it?
Email ThisBlogThis!Share to TwitterShare to FacebookShare to Pinterest
Labels: fashion