Well, that week was relatively painless. I only attended school for two days this week because I had Wednesday to relax. Now, I'm trying to get back into the swing of things. The first thing to do on that front is getting back to blogging. So, here I would like to show some pictures from my London trip and share a bit of news about next year. 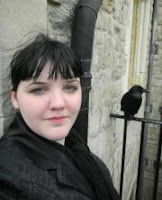 Here I am with one of the famous ravens in the Tower of London. While the Tower of London turned out to be swarming with kids more than I'd like and with most of it roped off from tourists, this little guy made it all worth it. He was perched on the railing next to a walk way and I managed to get a silly selfie with him before some older man tried to pet him and got bitten. Serves him right. 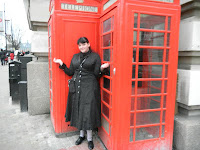 I had to laugh at myself for wanting this picture with the iconic red telephone boxes. It was extremely gray the entire time we were there, but these red boxes were the best pop of color in the city. There were some black ones around somewhere, and many jokes were made about the "goth boxes." 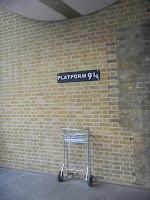 Of course, I couldn't go to London without taking a trip to Platform 9 3/4! This was my first trip on the underground by myself (oh what a big girl I am!) and I had a lot of fun. There are some pretty talkative young punks on the underground. The only downside of going by myself was that I couldn't get someone to take a picture of me with the trolley. Ah well, next time! 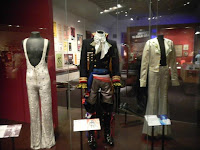 We went to the Victoria and Albert museum one day, looking for an exhibit of Victorian dresses. Unfortunately, that exhibit isn't up quite yet, so we contended ourselves with going to the Theatrics and Performing Arts exhibition. Look who we found there! Why hello, Mick Jagger, Adam Ant, and Jimmy Page! You all are incredibly tiny. Was that because you didn't eat anything or because of the cocaine? (I kid, I kid. Sort of.) 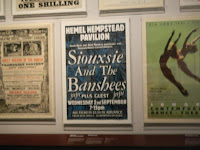 Again in the Victoria and Albert, I found a poster that's very near and dear to my heart (and all of yours, I'm sure.) Ah, Siouxie! I didn't expect to see you here! 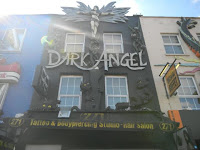 We went to Camden on Sunday and I was absolutely enthralled. It felt like home, seeing so many other spooky-types around. I spent most of my money there, and I bought some pretty cute things. Expect to see some in future posts! (Also, the shop fronts are amazing. Just look at that tattoo parlour.) 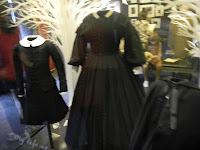 One of the last things we did was visit Kensington Palace. I was really in luck there because they had an exhibit called Victoria Revealed. In it there was a large collection of Queen Victoria's clothing, personal effects, and quotations. It was very enlightening, and reaffirmed that she was my favorite queen of England. Above you can see some of her mourning clothes, and that of her children.

There was no way that we could do everything. There just wasn't enough time, and my grandmother can't walk long distances. So, I didn't get to go to Highgate or go in the London Dungeon. Still, I can't be too upset about that! There was too much good to be brought down by anything bad. Now, I mentioned news above. What news could that be? I might be studying abroad in London during the fall semester! I have to get my school applications in order, but I'm really incredibly excited for that. Hopefully you'll hear more on that later.
Email ThisBlogThis!Share to TwitterShare to FacebookShare to Pinterest
Labels: fashion, misc