Instead of my usual intro, I'm going to give you a quote and ask you to ponder it. Deal? Deal.

The great surrealist artist Salvador Dali was described by his fellow students at the Madrid art academy as "morbidly" shy according to his biographer Ian Gibson. He had a great fear of blushing and his shame about being ashamed drove him into solitude. It was his uncle who gave him the sage advice to become an actor in his relations with the people around him. He instructed him to pretend he was an extrovert and to act like an extrovert with everyone including your closest companions. Dali did just that to disguise his mortification. Every day he went through the motions of being an extrovert and, eventually, he became celebrated as the most extroverted, fearless, uninhibited and gregarious personalities of his time. He became what he pretended to be. 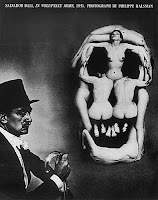 Now, why am I asking you to ponder a quote about Salvador Dali? Was Salvador Dali a Goth? Of course not, but what Michalko has said about Dali is something very interesting that I find applicable to the Goth subculture. It's said that Goths have to have some sort of self confidence, but you have to admit that self esteem issues and introverted behavior are rampant in the subculture (though those things are not necessarily always intertwined.)

There's no doubt that our subculture accepts introverts, and there's nothing wrong with that at all. We as a subculture pride ourselves of our acceptance of everyone, whatever their quirks, and you have to admit that there are some Goth activities that are more tailored to introverts than extroverts. What's more Goth than staying at home with a vampire book and listening to the music of your choice? Even Goth dancing usually isn't done in partners but instead is an individual exploration of the music. Being alone isn't a bad thing to most Goths at all.


However, Goths are under certain pressures. We are constantly under social critique from the people who find our music "satanic" or our clothes provocative or morbid, so many seek out companionship with other Goths who understand our interests and share our burden. From the small town Goths that want to be accepted by someone for their oddness to the big city Goth who knows other Goths but is too shy to meet them, there are a lot of circumstances that would lead a Goth to wanting companionship.

For a personal example, I now know that I am going to one of two schools: Mount Holyoke College, or Seattle University. I am the only person I know going to one of those schools, so I'll have to undergo the chore of meeting new people and making friends. I say chore because I can be a somewhat shy person around new people and very introverted at times, which isn't ideal for meeting new people. That and, unfortunately, Goths can appear a little intimidating to people, so I could be considered at another slight disadvantage when it comes to meeting people (since they may judge me, or something like that.) However, I would be willing to act extroverted because it is important to me to make friends as part of my college experience. I will not let my shyness hold me back.

Do you, my readers, think that people should use this behavior when seeking out other goths? Is it worth pulling a Dali and being not-yourself in order to find desired companionship, or should you stay true to yourself? What do you think?
Email ThisBlogThis!Share to TwitterShare to FacebookShare to Pinterest
Labels: misc