Musings: My Summer as a Goth

If you're an independent movie fan, a lover of Gothic Charm School, or a passionate devotee of kickstarters, chances are you have seen mention of project called "My Summer as a Goth." If you are none of these things or have somehow bypassed the mentions of this project, I'll try to hold back my excitable girlish squealing to give you the rundown. (Yes, squealing. I am that excited.) 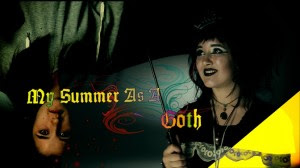 "My Summer as a Goth" began as a kickstarter project back in the fall of 2011 which asked for donations from interested people to begin the filming of a movie called "My Summer as a Goth." Promoted by Goth icons such as Jillian Venters, this movie reached its goal of 20,000USD and then some in start up money. Below you can see the video that accompanied the kickstarter project:


The movie is, according to the kickstarter project page, about "16 year-old Joey Javitts, sent to live with her grandparents for the summer. During the course of the summer, Joey falls for the neighborhood Goth boy, Victor. She is transformed by Victor and his merry gang of Goths from normal teenager to Goth goddess--falling in love, making friends and finding herself in the process."

According to the Gothic Charm School post about it, the co-producers and writer contacted Mrs. Venters to be the "go-to Goth" for fact checking about the subculture so that they didn't misrepresent it. This itself seemed to be to be a real step in the right direction. Many Goths struggle with the idea of being shown in the media in the wrong way (not necessarily the bad way, though that can be a part of it) and hopefully having a Goth on premises has helped with that.

However, the more recent news about the project is that they have just filmed a test scene. What scene did they chose to film? Joey's actual make over!

I can't lie, I'm very excited for this movie, and the makeover scene did nothing to quell my excitement. Due perhaps in part to the staff of Goths who seem to be helping out with the movie, the movie seems to have a really good grasp on what being Goth is like as a teenager. From one of the boys wearing a Bauhaus t-shirt to the girl's tongue in cheek humor about licking light-sockets, these seem entirely appropriate. The makeover includes some DIY elements which is also really indicative of some real understanding about the subculture, I.E. it's not just about going to Hot Topic and buying everything black in sight.

Another this is that the Goths don't seem to carry the negative stereotypes that many movies place on our shoulders and I'm very excited for that. If this movie can show just one person that they ought to be more like the grandfather (did anyone else cheer when he said "Yes, and she looks like she's finally having some fun"? I certainly did!) in their acceptance of younger Goths that they know, I'll be a very happy girl indeed.

If you're interested in hearing more updates about the movie, My Summer as a Goth has a blogspot here that I encourage you to follow, a Facebook page, and the official My Summer as a Goth website. Dear readers, how excited are you for this movie? Do you have any reservations? Any concerns? What are you hopeful for?
Email ThisBlogThis!Share to TwitterShare to FacebookShare to Pinterest
Labels: misc