On "How to be Goth" guides

How many of you have read any summaries of books that you were "reading" for a class? Even if you don't use them yourself, it's common knowledge that they're a popular tool for students of all ages who can't or won't, for whatever reason, read the actual text. But can you use those kinds of guides for anything else? I wonder, could you use Cliffnotes for...Goth?

They're everywhere. On eHow, Yahoo!answers, wikihow, and anywhere else that you can ask a question or provide a guide, someone has provided a primer for becoming a Goth. Not only that, but anywhere you can respond with some measure of anonymity and personal security, someone has voiced their displeasure over these guides. Well, more than just one someone. In fact, many Goths have a low opinion of people who write these guides and people who read and take them seriously. While one might have come into Goth without those guide's help, what makes the way that others become Goths bad? To answer, let's look at what someone who takes those guides seriously believes about Goths or what we should do: 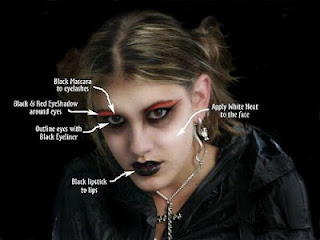 Source: Buzznet
"But Mary!" I hear you ask from across the broad, expansive internets, "Some of those are satirical! Why are you picking on those?" Gentle reader, I have come to a few conclusions in life, but the one that perhaps I hold the closest to my heart goes thus: Some people will never, ever, get sarcasm. That means that, while the above comment about the bodies of Goth dudes was intended as a joke, some person out there probably doesn't get it. While the author of those kinds of articles probably will laugh at these people who take it too seriously, they're not being much of a help to us.
The basic set up for these guides generally goes that they give a short, two-sentence primer on the history of Goth, then a lot of rambling about clothes, a small bit about "real Goth music" (which can range from stereotypical to just false) and then a short bit about how to change your personality to fit the subculture. If the writer is feeling adventurous then perhaps they'll mention what literature one should read. This is usually accompanied by a picture of a popular Goth model or a stock photo of a suitably brooding gentleman or lady, or (goodness help me,) a tutorial on Gothic makeup. And don't even get me started on Goth makeup tutorial videos. 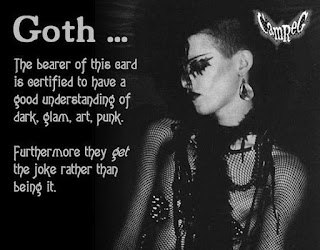 Source: SiouxsieLaw
For many Goths, the subculture represents more than just its musical roots. The fashion, aesthetic, sense of humor, and tastes in literature associated with Goths can hold just as much appeal as the crooning of Robert Smith to some. Many Goths call Goth an important part of their personality. So, it's natural to say that some become offended when people try to give a guide on how to adopt someone's personality, the essence of their being. Even if, to you, Goth is just a musical movement that you love, it can be hard to say that seeing your favorite bands listed as a checklist. Still other people don't care.
The main complaint about this wave of guides that I've seen centers around the idea that it is an artificial personality and style that someone is trying on, not someone being themselves. I saw much the same complaints against My Summer as a Goth, in which "real Goths" make over a "normal girl" to be Gothic instead of letting her just be herself. However, even I defended it because it's natural for people to adopt fashions and tastes similar to their friends. However, something about the idea that an anonymous person on the internet telling people how to change something as personal as their music tastes, aesthetics, etc. rubs me the wrong way. It's not a mutual thing, there's no two-way learning. The result is an image of Goth that feels inorganic and hollow. It's soulless. Where's the fun in that?
And if, per chance, you are a non-Goth who has stumbled onto this blog post searching for the very types of articles that I show disapproval of, I say only this to you: be true to yourself. If you're a Goth, it'll show. You don't need a guide for that.
Email ThisBlogThis!Share to TwitterShare to FacebookShare to Pinterest
Labels: the scene