Military Style for Goths: Insensitive or in style?

Goths generally like to think of ourselves as an accepting group of people. Freaks from all walks of life can usually come together to enjoy the music of their choice while wearing the clothes of their choice. It typically doesn't matter what your political or religious views you have, as long as you aren't being repressive of other people. Overall, Goths seem to be some of the least prejudiced people that I know (generally speaking, of course, as there are some topics that get Goths riled up like no one's business.) So, why are we all wearing Nazi hats? What's our deal? Perhaps I shouldn't make attempts at amusement in this introduction. The Nazis are not a topic that should be laughed about, what they did was horrendous and we are much better off for their absence (well, they're absent for the most part. Don't get me started on Neo-Nazis.) However, the subject still stands that it is not uncommon for Goths to be spotted wearing hats and other uniform-esque clothing that have a silhouette commonly associated with those worn by the Nazis. However, as implied in the above paragraph, most Goths aren't exactly the Nazi-sympathizing types, and those that are aren't generally thought highly of in the community. So, if Goths are generally against the Nazi-mindset, then why would they wear Nazi-esque uniform pieces? Is it insensitive, is it cruel? Does it send a false message out of one's political leanings? Or is it simply a misunderstood wardrobe choice much like our almost subculture-wide admiration of the corset? 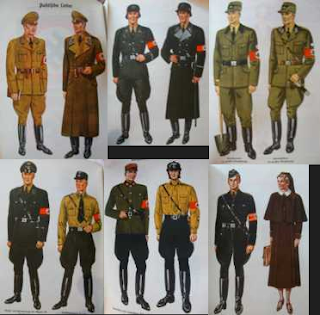 I think, first, it would help to make a point of what I am saying when I say "Nazi-esque uniform pieces." Afterall, a misconception about Nazi uniforms is that they all look the same, but this isn't true at all. Above you see a few types of Nazi uniforms for various careers and stations which you can read up on here. However, a few similar elements can be pinpointed in both those uniforms and what one might call a "military Goth" styled outfit. Knee high combat boots, trousers that have wider thighs and slim calves called "jodhpurs", gas masks (those these are often worn from many historical periods) and the iconic peaked cap, with or without the eagle emblem. How does this translate to a Goth? Check out this image below. 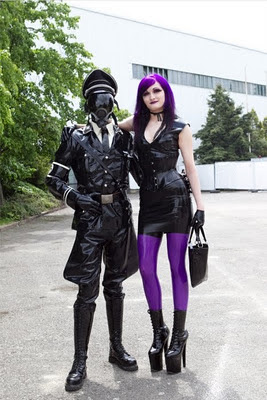 While the lovely lady on the right in this picture has a pretty outfit, we're going to be focusing on the individual at the left. Note the common elements that one might associate with a Nazi uniform: the jodhpurs, the calf-high boots, the military jacket, the peaked cap, the arm band, and then topped off with a gasmask-like apparatus. Of course, for the Goth look the uniform is slightly altered. For one, it is rendered in black PVC/latex, for another there is no eagle or swastika emblem on the cap, and lastly from what I can see the arm-band does not bear a swastika. The result? Intimidating, nearly inhuman. But is this a direct homage to the Nazi mindset?

I don't think so. While the model above wore a full-on, near-Nazi outfit, it would be presumptuous to think that he (or she, or they, I'm not sure) is a Nazi-sympathizer. Goths take fashion influences from all over the historical world, and as some might say "it's just clothes!" Another influence to Goth that has capitalized on this style of dress to some degree would be various aspects of fetish and BDSM fashion. If you feel so inclined, you'll find with little effort that many fetish models have opted to wear certain elements of military fashion, and especially the peaked cap so often attributed to Nazi uniforms. Perhaps because it is unsettling and intimidating, perhaps because it is a symbol of power (I quote from the Nazi uniform source I referenced above when I say that "Uniforms demonstrated status, but also power — and the display of power was a major element in Nazi propaganda.") or perhaps because they are also of the opinion that it's just clothes. While certain people opt for the totally inspired look, the more popular thing for Goths to do is just wear a peaked cap, like the fetish models mentioned earlier. Above, you can see a picture of Joji Grey modeling in his peaked cap. Does that make him a Nazi sympathizer? Hardly. While it has, perhaps, Nazi-connotations, the reputation of the peaked cap is actually slightly misaligned. After all, the Nazis were not the only ones wearing them and they still today are not. If you go onto the Wikipedia page for the peaked cap (and I'll even provide a handy link for you here) you can see that the peaked cap has been worn by many different law enforcement and military groups. At the bottom of the page there is even a picture of a smiling older man wearing a peaked cap and serving his job as a Hong Kong Hawker control officer. I wouldn't presume that he was a Nazi, what about you? 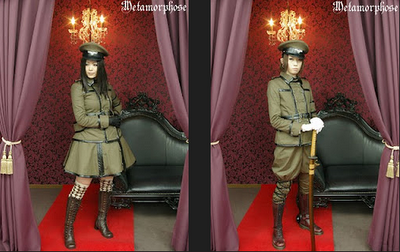 On the other side of the coin, Goths are not the only ones who have been split on the issue of the "military inspired" outfit that, perhaps, edges "too close" to the Nazi uniform for our liking. Lolitas faced the same dilemma when popular Lolita brand Metamorphose released a military-inspired line in the fall of 2010. Above are two of the main outfits in the brand photos. Note the eagle logo on the peaked caps, olive coloring, jodhpurs, and military-styling of the coat. Lolitas, who represent a wide range of religious and cultural backgrounds just like Goths, took their turns debating about the outfits. Some called them offensive and too-Nazi, others defended them by saying that they were just military-esque and the only thing that was even the least bit distasteful was the eagle on the cap. I won't post too many quotes here, but there is a whole long forum thread on the main Lolita Livejournal community EGL here if you happen to be interested.

Personally, I think that the bias against military inspired fashion because it is too reminiscent of Nazi uniforms is a bit over the top. Not only is it an unsafe and unfair assessment to make that those who wear the "Nazi-like" pieces are Nazi sympathizers, but those elements that are considered to be similar to the Nazi uniform actually have a much more detailed history. Gas masks were worn by all parties during the war, Goths are no strangers to combat boots, jodhpurs were once worn by many as riding pants, and even the swastika has a rich history beyond the Nazi party. Still, the associations are strong, and it's not wrong for people to calmly state that they cannot move beyond the Nazi-association in their mind so they would rather not get in on the trend. What do you think, dear readers? Are these types of military fashions offensive?
Email ThisBlogThis!Share to TwitterShare to FacebookShare to Pinterest
Labels: fashion