How Important is Living Near Other Goths to you?

Earlier this week I went off to go visit Smith College and Mt. Holyoke college in order to interview for my application. When I went there, I found myself reflecting on the fact that because these colleges were ninety minutes away from the city of Boston, I migha not be enjoying a cosmopolitan life during my college years. As I continued to think about it, I realized that my contact with other Goths might be extremely limited. And, I thought to myself, I don't really care. 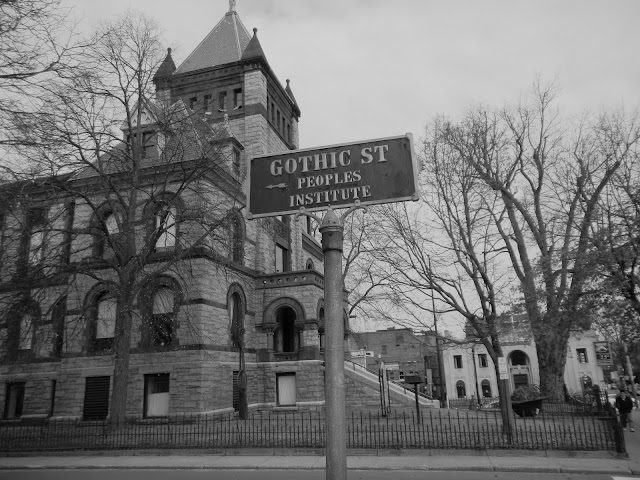 My picture of a street sign in North Hampton, MA.

As you all are probably sick of hearing, I don't have Goth friends in the real world outside of my computer. Being the only Goth in your town can get lonely, can get frustrating, but I'm mostly used to it by now. I have my computer and I have friends that I have made bonds with on grounds other than our mutual spookiness. I don't mean to sound full of contempt of Goths who are friends with other Goths, I'd love a friendship like that, but I don't begrudge the friends that I have for not liking Bauhaus or Siouxsie. Still, I realized, I'm used to not being in the midst of other goths. Why should it concern me during college?

Perhaps because any move leaves people grappling for a sense of security and normalcy, but I don't seem to be the only person that wants to connect with their scene at their arrival. For all the new places, people, and experiences you're sure to meet, having a semi-familiar base to go off of would seem nice to some. I tend to think that the Goth scene, while it certainly varies from location to location, has the same roots not too far back to have been lost, tends to be more welcoming to new comers than some groups, though it depends on the people involved in the scene of course.

Of course, some Goths don't like to be involved with the Goth scene in their area. They might have had an experience with drama, they might not be interested in the club scene where they are most likely to find other Goths, they might just be private people. For whatever reason, it's enough to keep some Goths confined at home. They might not care about whether the place they are moving to has any Goths at all and there's nothing wrong with that. Tastes can mean the difference between a lot of things.

Goths and many other Alt-types have a special kind of bond. Because we often face opposition to our music and appearance, it's natural to want a kind of support network. From opening our own clubs to instituting the mutual "freak nod" when you see another spooky, we as Goths do a lot of networking to make that network of friends to fall back on. To find the community in the real world is almost a dream come true to small-town Goths whose only connection to the scene has been the internet where we are often showered with stories about the busier Goths spots.


What do you think about living near other Goths? Answer the poll below, I'm curious to see what you think?

Email ThisBlogThis!Share to TwitterShare to FacebookShare to Pinterest
Labels: the scene