5 Common Myths About the Victorians

The Victorian Era, under Queen Victoria of England, has a special place in the heart of Goths. For my intents and purposes, I will be extending the Victorian era to other countries beside England, because many of them took influences from the Victorians. See, children, this is what we call globalization. In any case, here are some myths that I've seen thrown around about the Victorians and some cases against them. 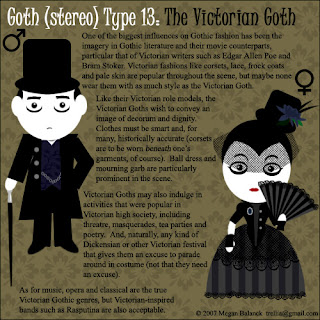 1. They all wore bustles.
The Victorian era extended from the years 1837 to 1901 and, luckily, fashions changed all through those times. The traditional bustle (or what we think of as a bustle) came into fashion in the late 1860s and lasted until the early 1890s. Even then, however, the average woman usually wouldn't wear one. Why? The emerging middle and working classes could not afford it, in two ways. Firstly, a bustle would interfere with their ability to work. Factories were not at all fit for bustle wearers and they would have just gotten in the way. Secondly, I want you to think of how much rich, decadent fabric today costs. I don't mean the bargain bin at Jo-Ann's, but I mean the good kind. Now increase that because the Victorians were just getting into more advanced textile mills and try to think of how much it would cost to make a bustle skirt with yards and yards of this decadent fabric. Yeah, it wasn't cheap, so not all women wore them.

Source: Lady-of-Crow on DeviantART
(click the link to see the dates associated with each silhouette)

2. The Victorian era was completely stagnant until the gilded age rescued us.
The Victorian era was actually the era of the movers and the shakers, the ones who would form our modern world by disregarding traditions and carving a new way of life out for citizens. Asylum reform, corsetry reform, the suffragettes, and even everyone's favorite tradition of the white wedding dress were all prevalent in the Victorian era. Type "Victorian reform" into any search engine and you'll find many types of reforms that, even today, we are feeling the effects from. At least Steampunkers know that the Victorian era was a time of invention and discovery, though their approach is fictional.

3. The Victorians were all horrible prudes.
Happily, no. The Victorians had hormones and desires just like you and I do. However, unlike you and I, the Victorians were extraordinarily conscious of their reputation and how they appeared to those around them. Since travel was expensive, most of the Victorian society was restricted to the town in which they grew up, and if you didn't want to be mocked everywhere you went for the rest of your life, it would probably be a better thing for you to mind your manners and continue to be proper. However, what happens behind closed doors was not necessarily still prudish. The Victorian woman did not "lie back and think of England" as a rule while she and her husband were having sex. Of course, the expression of sexuality was not as celebrated as it would be in the later 20th century, but it was not as hushed up as it could have been. Besides, reading the literature of the day (particularly the feminine romance novels and the works of Oscar Wilde) should give you an idea of how sexual and romantic the Victorians could be.


4. The husband controlled every aspect of his wife's life. Like many cultures before them, women were rarely in a seat of power in Victorian England. Men ran the parliament and women did not gain the right to vote until 1928, but that does not mean that they had no power. The high society Victorian woman would and could join political and social causes, throwing her money behind certain reforms until they were to her liking. The Victorian era woman would have known that to control something as a woman was to do it subtly, manipulating the efforts of men into doing as she wanted. But, honestly, a woman's relationship with her husband was very personal to them and not all husbands were tyrannical in their rein over the household. Besides, if the woman was the one raising the children (or if she picked out the nursemaid in charge of raising the children) then she had a lot more sway in her family life than one might expect at first glance. 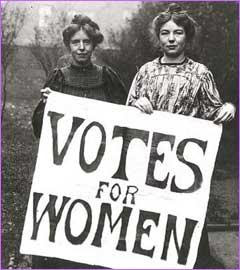 Like bustles, corsets were worn only by those who could afford them. Think of the materials used in making the corset: fabric, steel, ribbon, thread and either someone to put it all together or a machine to put it all together. All of these materials costed money, money that most people did not have. The average salary of Americans in the manufacturing force in 1870 was $129 (according to the National Bureau of Economic Research) a year₁. A year. On that kind of budget, most women could not afford a corset period. They were, more than likely, more focused on their families and any jobs that they had than on their figure. During the later 19th century when doctors were realizing that tight lacing was leading to severe medical problems, the call for the end of corsetry was head loud and clear. The Rational Dress Society, formed in 1881, protested "against the wearing of tightly-fitting corsets; of high-heeled shoes; of heavily-weighted skirts, as rendering healthy exercise almost impossible; and of all tie down cloaks or other garments impeding on the movements of the arms. It protests against crinolines or crinolettes of any kind as ugly and deforming….[It] requires all to be dressed healthily, comfortably, and beautifully, to seek what conduces to health, comfort and beauty in our dress as a duty to ourselves and each other" according to their Gazette.

A reform corset from 1892
Source: Wikipedia.

If you have any other queries about these myths, type them in the comments. Another valuable resource that I just love to promote is This Is Not Victorian over on Tumblr, dedicated to the posts tagged "Victorian" that just...aren't. Let's end an era of ignorance about the Victorians once and for all, shall we?
Email ThisBlogThis!Share to TwitterShare to FacebookShare to Pinterest
Labels: misc