As I might have posted on this blog before, I am quite the lonely Goth. My high school (a damn art school, even) is bereft of other spooky types and I lack a car to be able to go into the city to find any. I'm also seventeen, under the club legal age, so that's a no-go. So, what can I do about finding spooky types? The most I can do is go onto the internet and try to interact with some there, but this method of communication lacks the intimacy of face-to-face communication. What's a poor Gothy girl to do? I looked to other alternative groups for inspiration, and I again stumbled upon the Lolitas with their idea of meetups.

A Lolita meet up, generally scheduled through the local Live Journal groups (there's one for every US state, several countries, even specific cities), is an event where several Lolitas go to enjoy themselves while dressed up in their frilly finery. They take pictures, see shows, go laser tagging, ride a carousel, eat lunch, have a tea party, or anything else that you might do with friends.
The closest thing that Goths have to meet ups is going to the local Goth club or concert. Unfortunately, for those who dislike alcohol or dancing, for Goths under the age limit, for those who don't want to have to shout to have a conversation, or for those that just don't want to go to these places, you're pretty much out of luck. Even big Goth events, like Bat's Day in the Fun Park and Wave Gotik Treffen, are few and far between, very regional, and, more often than not, quite expensive. 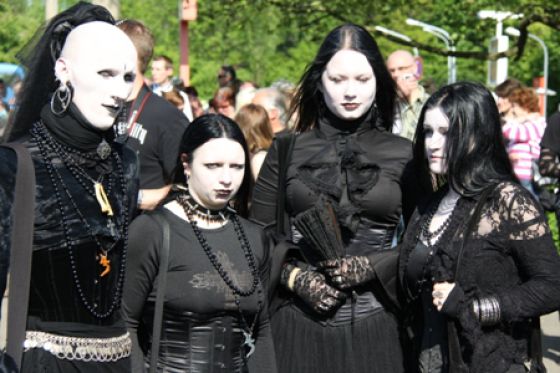 Lolitas, who I will use as an example because I am unfamilar with any other Alternative group that really does regular meet ups, have meet ups because they need an occasion to wear their clothes. Unless you are a Lolita "life-styler", Lolita clothes generally are not worn every day. Us Goths, on the other hand, tend to wear some sort of spooky ensemble (though the intensity of the spookiness and the level of fancy varies) daily, unless your school or work requires a uniform. It would seem odd, to most Goths, to only wear our clothes for special occasions. Have you all heard of the "weekender" Goths? They are rarely spoken of politely in this scene, are they?

I've heard the complaint before that Goths are too dramatic to have meet ups and that it's easier to avoid drama online. I challenge these people to read Loli-Secret or the message boards on Gothic.net to find some online drama that is basically unavoidable. There is nothing inherently drama-free about the online world because it is used by real life dramatic people and you will find them wherever you go. The real world can be worth the risk of drama, too. I've never known a Goth to be violent, and surrounded by other sensitive types, there's not much danger you can be put in outside of your computer. 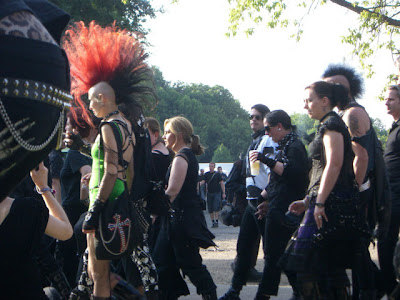 Source: Damn Cool Pictures
Should Goths have meet ups? Obviously, I think so. While Lolitas might complain about the lack of any actual basis for friendship during the meet ups because the only thing that connects them is a love of frilly clothes, I think that Goths have a lot more to build friendships off of. I make a lot of friends in general based on common tastes in music, movies, literature, and aesthetic sensibilities, so why not us? There could be so many friends to make if we allowed ourselves the chance to find out that we have things in common.

What could Goths do for meet ups? Anything, really. Tea parties, going to midnight screenings of horror movies, museum trips, graveyard tours, abandoned building exploration (get yerselves a permit, obviously), go to play laser tag, join a rally, the list goes on and on. Anything to bond over can be done by Goths if we Goths get our heads together and plan something fun. If people are complaining about the Goth scene being dead, then fuck them. If the scene needs a little bit of CPR, it's only us who can do something about it. I'd rather not let the scene die on my watch whether I was around to see Bauhaus perform live or not. Do you want it to?

However, all is not lost for you East Coast USA goths. The lovely LambentBeauty over on Tumblr has started a new blog, East Coast Alt Meetup to keep the community abreast of any planned events for us spooky types. Hopefully this will inspire other areas to create their own meet up blog and Goths can partake in social interactions with other Goths without the need to go to a club every night.
Email ThisBlogThis!Share to TwitterShare to FacebookShare to Pinterest
Labels: the scene