What's in my magical bag of holding?

Alas, my blog post today is brought to you on the wings of some unhappy news. This morning, I was forced, forced no less! to undertake the slaying of a great personal demon: the SATs. Yes, yes, it was a great struggle. But we'll see its great hulking carcass when the scores are released in the future. For now, I bring you a popular meme: what's in my purse? The idea to fill out this meme was brought about when I was emptying my purse this morning so that I did not take anything "illegal" into the testing site. Mechanical pencils, oh the shame of them! Natalie over at Gothy Two Shoes also made a "what's in my bag" post on her blog, so that also might have had something to do with it. 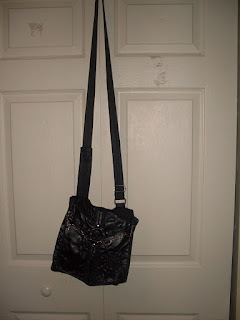 This is my usual purse for school, by h.Naoto which I got for 30USD from a fellow Lolita at Otakon. It can hold a lot, though it looks rather small, and has a few zippered pouches so that I can have certain items in easy reach. The inside of it is covered with cryptic nonsense phrases and countdowns, which is fun. It's my go-to purse, but sometimes I swap out for the cliche every-goth-girl-has-one coffin purse from Demonia (I have the one with the cross on it,) and then when I need to travel light I might take the small bat-wing shaped purse, which I purchased here. 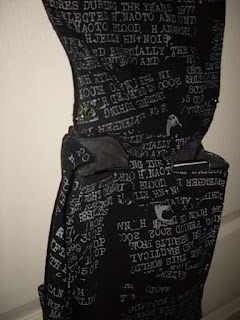 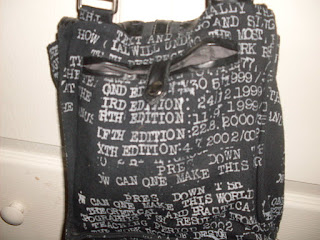 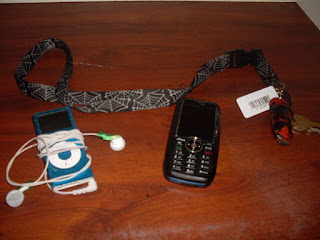 My dinky little cellphone is an LG Rumor that I've had for two years, but it serves pretty well. The camera is shot but I never used it much anyway. My ringtone is crows cawwing, which makes me very happy. This iPod is actually broken, I'm getting a black 30g iPod classic in the mail soon. It has been through the ringer, to be fair: I got it the summer I went to China five years ago and it's been through the washing machine twice. Now it wont move past the title screen so the only thing I can do is hit shuffle and click through to find a song, but then it loses battery like nobody's business. I can't wait for my new iPod, I think I'm going to find a case to deco for it. (And I have really nice over-ear headphones that I can use then instead of these earbuds.) The lanyard was from Goodgoth and the flashdrive I painted with black sparkly nail polish because a girl in my writing class had the same one and I didn't want them ton get mixed up. 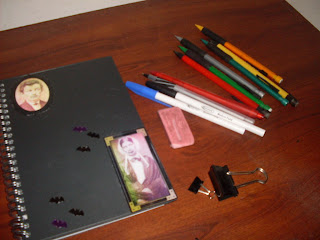 I already posted about the planner which I have since decorated with lenticular portrait stickers from Michaels. It used to be covered in bat shaped confetti (also from Michaels,) but those kept falling off. I think I'll do them again and put clear contact paper over the cover so that I can tote it around in my bag without damage. And, yes, I do need every single one of those pens and pencils. I used to carry around a caligraphy pen too, but I lost mine, so I need to find a replacement. 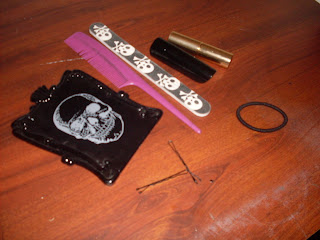 I am a devotee of carrying unnecessary amounts of makeup in my purse. But, it's not all from vanity. It's because I have a horrendous memory and keep forgetting to take old lipsticks out of it when I toss them in for school. The colors that I am carrying at the moment are Bois de Rose by Estee Lauder and Exotic Orchid by Lancome. I hardly ever use the bobby pins that I carry, but it sucks when I need them and don't have them. The mirror is from Hot Topic and I just couldn't resist it. The inside is cracked though, so I might have to get a replacement soon, sadly. Maybe I'll deco a new one with the leftover supplies from the iPod deco. The comb is just a plain one that I want to replace with this one from Pushin Daisies. Also, isn't that nail file adorable? It's also from Hot Topic, those fiends with their clever marketing tactics. The only thing that sucks was that it was sold in a pack of two and the other one was white with pink hearts on it. Bah! I say, Bah! 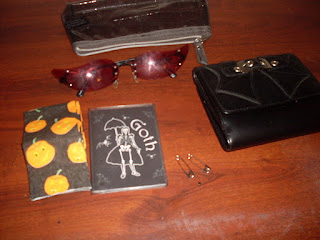 The ID case is from Pocket full of Posies on Etsy, a shop that I highly recommend. Now most of my friends can determine that it's my ID I left behind (AGAIN) without even having to open it. The wallet is from Demonia but I bought it here, and I adore it. It is rather large though, so if you were to try and put it in your tight jeans pocket I doubt that would work. The sunglasses were a gift from my mother and they are all sorts of cheesy fun. Not only are they "cat eye" shaped, they're red and the sides are shaped like ankhs with roses printed on them in white ink. So cliche. So awesome. The tissues are Halloween ones from last year, which I will be stocking up on this season for the coming year. I think that safety pins are also really important, because even if I didn't rip my clothes one of my friends probably did, so it's best that SOMEONE carry them. And since I already have the magical bag of holding, why not me?

Obviously, this is a lot of stuff to carry. When I need to run out quickly and travel light, I'll usually just grab my ID case, a few dollars and my keys and tuck them into my waistband or bra (no pockets for the skirt wearing goth, alas.) That's enough to get me by, usually. So yeah. Here is your fluff piece of the day. Next week I think I'll have a recipe for you all, since I've been making some yummy fall-flavored things to welcome October.
Email ThisBlogThis!Share to TwitterShare to FacebookShare to Pinterest
Labels: misc