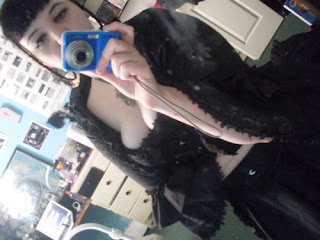 I love the Renaissance fair, even though I haven't been there in quite a few years. It's hard to get around when you can't drive, so I decided to make a show out of it. I went with my father, younger sister (6), younger brother (8) and my cousin and her boyfriend. Mostly it was just my cousin and her boyfriend and I wandering around together, but for a while I sat around watching a group of bagpipe players and popping in and out of shops. 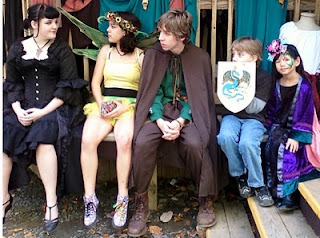 I wore my prom dress with a knee length underskirt, a corset and a pair of kitten wedges. Those tiny looped braids are extremely irritating and I could barely get them out afterwards, but it looked like I had crimped my hair afterwards which was cool. I don't know what I'm going to wear if I go again this weekend with some school friends. Maybe the same overdress with another corset and a longer underskirt, or just my normal clothes. One day I have to get an elaborate costume for events like these, since I plan on attending in the future, and I want to have my costume the best it could be. 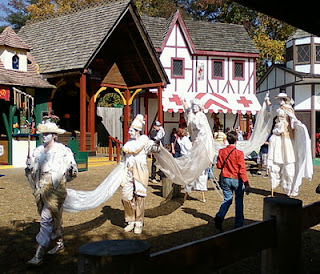 Of course, I have never seen such poorly fitted corsets, but I really just take that in stride at this point. With cheap and cheaply made corsets like these, it really is too much to hope for that the corsets would be the right size or tightened correctly. Oh well. Some of the elaborate costumes were well worth it. My favorite part was trying on hats in the hat stall (which didn't allow pictures, boo!) because they were pretty persuasive. I was only distracted from buying a silver and black hat with a spider on it by my cousin who called me out to go watch the joust. 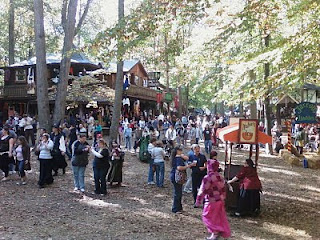 The joust was amazing, I thought it looked extremely painful and now that I've gotten horseback riding experience I can appreciate just how difficult putting the lance through a 2 inch copper ring while at a canter must be. I was routing for a man on a black horse with a green/gold saddle, but I couldn't hear his name or really see well because I was seated next to an extremely obnoxious group of small children. My patience for little kids is so small.

So, have you guys done anything fun? This deadline for the school paper is killing me, so my content posts might be a bit delayed until next week. Maybe I'll be able to get something fun up on Saturday... we'll see!

Email ThisBlogThis!Share to TwitterShare to FacebookShare to Pinterest
Labels: fashion