I started doing the Goth Challenge on my Tumblr a while ago but because Tumblr isn't great for, ya know, content posts, I stopped doing it after a while. I did want to do it on this blog, but since I post only twice a week I thought it might be uninteresting to do one every single day after a while. So, I decided to do the challenge once in a while on here, answering 5 questions each time. I'll be done in six of these types of posts and, since they'll be spread out among other posts, hopefully they won't be overwhelming and I can do them when I need a quick and easy post. So, here we go.

1. How did you discover Goth? 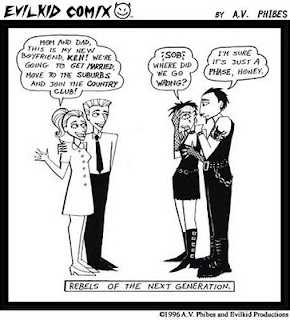 My mother was a Metal head who dabbled in Goth waaay back in the day, and though she no longer dresses the part (now she’s got a sort of showered hippie/earthy/steampunk thing going on) she still often listens to the music, so I’d been exposed to the music early on in my life. However I only recognized the Bauhaus/etc I’d been hearing as part of the Goth subculture when I was a preteen, and only started dressing Goth myself and becoming active in the subculture around the age of twelve. Now five years down the line and I’m happily entrenched in this lovely subculture that I call home.

Besides my failed attempts to repair a pair of cheap Demonia boots that involved a hammer/nails and industrial glue, nothing really remarkable happened in my Babybat days. They passed just like everyone elses preteen years, I suppose, just with added Sisters of Mercy and Siouxsie Sioux to the usual HIM and Nine Inch Nails (and I refuse to be ashamed, I still like both of those bands.) My two biggest wardrobe experiences that I regret as a babybat aren’t even babybat clothes, they were two sweatshirts (one rainbow tyedye that said “Barharbor” across the chest and one a dark forest green zip up) that I insisted on wearing with EVERYTHING, no matter if it matched or not. And of course I used to wear jeans. Ick.

I experimented with “casual goth” style for a long time because that’s all my budget had room for, but then I slid comfortably into Romantigoth and then to where I am now: Victorian Goth and Gothic Lolita. I don’t really have many photos since I hated getting my photo taken back in those days and I want to save the ones I do have for day 26 (a picture for each year you’ve been into goth.)

Wow I am boring, but I guess I still have a year to go before I’m out of what some people consider the Babybat age range (anything younger than 18.)

3. When did you come out of the Goth closet? 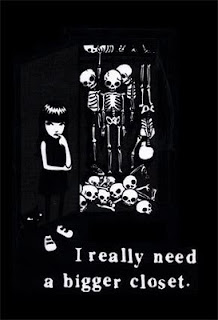 There was no real “Goth closet” for me. As soon as I found that the style that I loved, the music that I listened to and the tropes that I enjoyed had a subculture attached, I got into it and my parents have been wholly accepting. As for my friends, I was already in the “freak crowd” at school (we had a whole table at lunch that was mostly kids in black/gray/red, we looked a sight!) so what did they care? I never really referred to myself as Goth until the later part of my freshman year of highschool, I simply was and had been since around the age of 12.

4. Name a stereotype or cliche you can relate to. 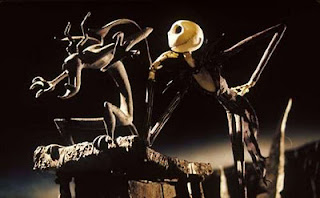 Well, there are a lot, really. That's why I am a Goth. I love Halloween, The Crow, black hair dye, stripy tights, damask, bats, crows, skulls on everything, wearing crosses and ankhs together, having a morbid sense of humor and black roses adorn my room in a bunch of places. I'm also a poet and short fiction writer in my fourth year of intensive writing programs whose chosen genres are horror, mystery and traditional British-gothic (sometimes Southern Gothic, but I just can't write like Joyce Carol Oates can, no matter what.)Those are just a few.

5. Is there a local band or group in your area?

I’m not really in touch with the Baltimore goth scene, due to the fact that most of its participants are over the age of 18. I mean, I know it exists, but I don’t know much about it. So, probably there are a few local bands, but I’ve never heard their music.

Email ThisBlogThis!Share to TwitterShare to FacebookShare to Pinterest
Labels: misc, the scene